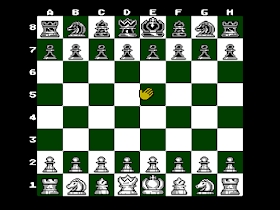 Genre: Strategy / tactics
Perspective: Bird's-eye view, Top-down
Gameplay: Chess
Published by: Hi-Tech Expressions
Developed by: Software Toolworks
Released: 1989
Platform: Nintendo (NES)
Along with Battle Chess, Chessmaster is the only representative of the classic chess simulator genre for the console. The game has a well-designed interface, an excellent musical composition in the intro, a decent set of sound effects, and several difficulty levels. A fun game for both chess beginners and pros, it is highly recommended to play it for all lovers and admirers of the ancient logic game. Moreover, it is the only one for the NES platform (in "Battle Chess" much less from chess, and more from arcade).
‹
›
Home
View web version