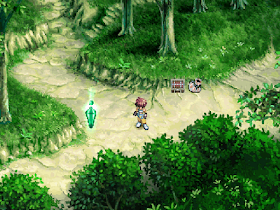 Before swap CD, save state to file, next CD, upload save state file.
Genre: Action, Role-Playing (RPG)
Art: Anime / manga
Gameplay: Action RPG
Setting: Fantasy
Published by: Namco Hometek Inc.
Developed by: Namco Limited, Production I.G
Released: 2001
Platform: PlayStation (PSX, PS1)
As with previous games in the series, Tales of Destiny 2 has five main gameplay modes: 3D world map, 2D cities and dungeons, battlefield, menu screens, and sidebars. With the help of the world map, the player can move between different locations, completing story tasks. Moving can be carried out on foot, by ship or by air, and when traveling on foot, the player will randomly engage in battle with enemies.
NPCs living in cities and also found in dungeons can provide useful information to the player. Sometimes dialogues with them are necessary for the development of the plot, but mostly they are optional additions and are made only to add depth to the fictional world. In each city, the player can buy equipment for his squad and consumables - as in all other games in the series, the currency is Gald. Money can be earned by defeating opponents or by finding treasure chests.
‹
›
Home
View web version