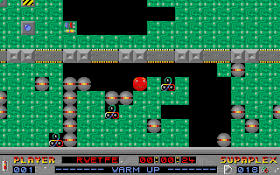 Genre: Puzzle
Perspective: Side view
Visual: 2D scrolling
Interface: Direct control
Published by: Digital Integration Ltd.
Developed by: Think!Ware Development
Released: 1991
Platforms: DOS, Nintendo (NES)
I think that no matter how many decades the history of computer games goes back, some of them will never be forgotten. One of these games is the legendary Boulder Dash (hereinafter referred to as BD), released in 1984, ported to every conceivable platform and giving rise to a whole galaxy of conceptual series of games. The latter are usually called “clones” of BD.
I am sure that the developers (two Swiss students, Michael Stopp and Philip Jespersen) initially only wanted to make a kind of joke for "their", transferring BD from a dark dungeon to the unknown world of software. The main character was Murphy's charming computer virus, very similar to Pac-Man, trying to destroy the required number of so-called. "Infotrons", obviously representing some information, and go to the exit from the level. Remained stones that seem to represent various firewalls here. Faceless tiles of printed circuit boards began to play the role of soil. The enemies were moving antivirus scissors and some "electrons", simultaneously being potential carriers of information. All the same, a falling ball (firewall) with your help can destroy your enemy with an explosion instead of you, and maybe, for example, block the path. 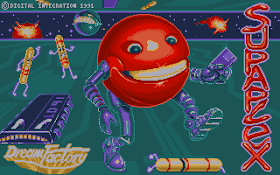 I am very glad that the guys did not stop at copying. First of all, the timer was removed. However, do not think that it has become easier to play! It's just that Supaplex torments the player not by the need to rush, but to think carefully. Solving many of the puzzles is truly strategic. No, sometimes hands have to be tested for agility - the levels are often super dynamic, but in general the Supaplex is much more logic-oriented than its predecessor. As the levels progress, you will see many elements that are unparalleled in BD. In motherboards, here and there, short circuits that are dangerous for the life cycle of the virus can occur at regular intervals. Some areas have an analogue of gravity that pulls Murphy down: you can only climb up in such areas by using printed circuit boards. Many areas are separated by ports: one-way, two-way, cross; conventional and reversing gravity. Floppy disks of various colors, capable of detonation, have appeared: some, like stones, fall, exploding upon contact with something, others can be consumed and placed in the right place, others move towards any free tile, like boxes in Sokoban, and explode using a special terminal.
The created tools turned out to be enough for the authors to create 111 (one hundred and eleven!) Of the most difficult levels. Sometimes the resourcefulness of the level builders is simply amazing - it is definitely impossible to get through with a swoop. This, perhaps, is the only drawback of Supaplex ... It is very difficult, and not everyone is able to play it successfully, devoting only a little free time to it. However, most likely, it was precisely because of its complexity and ingenuity that Supaplex won a whole army of fans.
The execution is impeccable! Excellent (of course, annoying when listening for tens of hours) music, very neat and eye-pleasing graphics, smooth animation.
A clear contender for the best puzzle game. I repeat: an ingenious, almost perfect game, quite rightly considered a cult!
‹
›
Home
View web version