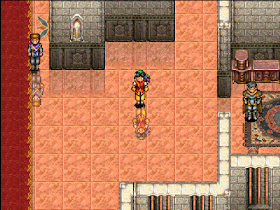 Genre: Role-Playing (RPG)
Perspective: Top-down
Pacing: Turn-based
Gameplay: Japanese-style RPG (JRPG)
Setting: Fantasy
Published by: Konami of America
Developed by: Konami Computer Entertainment Tokyo Co.
Released: 1996
Platform: PlayStation (PSX, PS1)
The game Suikoden takes place in the mythical Scarlet Moon Empire, ruled by the all-powerful Emperor Barbarossa. Subordinate to him are five Barons - the rulers of the provinces. You start the game in the image of the son of one of the Barons, (the name is determined by you), who entered the imperial military service, as his father wanted. At first, under the guidance of a senior officer, you complete easy tasks, but as the game continues, your mission becomes more difficult. You embark on a quest for some terrible secret of the Empire: its rulers cherish nightmarish plans, somehow connected with 27 magical emblems ...
Suikoden has a total of 108 heroes. Each of them can take part in your action (although you can only control 6 characters at a time). By attracting allies during the game, you can conquer your own castle. This becomes a pretext for new battles, in which whole armies are involved: either you defend your castle, or you besiege someone else's.
In general, in a game action, fragments are interspersed where you are busy with searches (they differ, in particular, in the angles of the image). Wandering from settlement to settlement or bypassing dangerous territories, you inevitably stumble upon numerous evil inhabitants of the Empire. Then some ripples pass across the screen - this means that you need to prepare for battle.
The episodes of the game where you have to fight are the most exciting. There is nothing special in them in terms of the technique of the game (choose a fighter, choose the type of attack, press the buttons and see what happens), but it all looks unique! The camera then snatches a piece of the battle in close-up, then moves away to cover the entire battlefield. And the pyrotechnic effects in the most intense moments of battles are truly magnificent.
‹
›
Home
View web version