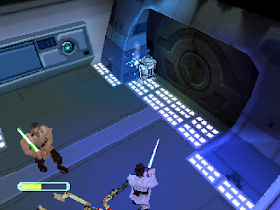 Genre: Action
Perspective: Bird's-eye view
Gameplay: Shooter
Interface: Direct control
Setting: Sci-fi / futuristic
Published by: LucasArts Entertainment Company LLC
Developed by: Big Ape Productions
Released: 1997
Platform: PlayStation (PSX, PS1)
The plot not only fully follows the part of the Star Wars epic of the same name, but you can also see additional scenes not included in the film of the same name. For the most part, we play as a young Obi-Wan Kenobi and Qui-Gon Jinn. As befits the Jedi, each of them has a lightsaber (in my opinion, the most stylish and effective weapon in the game, both in attack and defense), although there are many other cutting-piercing-shooting weapons) and each of the Jedi , of course, has the Power, which he actively uses (inspires his thoughts to the interlocutor or launches a shock wave that knocks out everyone around, and so on, in a similar spirit). In addition, at each of the levels, you can complete small side quests, and for their completion you can receive various useful gizmos and tips. In general, conversations play an important role in the game (you can talk to almost every character), and listening to these dialogues is a pleasure, since, for the most part, the dialogues are taken directly from the film!
‹
›
Home
View web version