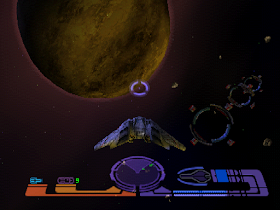 Genre: Action
Perspective: 1st-person, Behind view
Vehicular: Space flight
Setting: Sci-fi / futuristic
Published by: Activision Publishing
Developed by: Warthog Plc
Released: 2000
Platform: PlayStation (PSX, PS1)
Throughout the development, the British gaming press fueled interest in this project, feeding the public with extremely beautiful screenshots. Some observers even prophesied a Colony Wars-like success for her. As a result, the graphics in Invasion are really great. Every ship, from a tiny one-seat fighter to an interplanetary cruiser, looks like a solid 10, and the majestic, color-saturated backdrops will make you doubt that an old PlayStation can give such beauty, and even without the slightest hint of braking.
2377, end of the war with the Dominion. Several Borg ships have been sighted in the Titan system with apparent intent to invade Klingon space. Starfleet mobilizes a squadron to repel the attack. As a new recruit, Ensign Ryne Cooper, who has just graduated from Star Academy and under the command of Lieutenant Commander Worf (Star Trek fans will meet Captain Picard in the game), aboard the USS Typhon and control the new Valkyrie fighter will confront not only an external enemy - The Borgs, Romulans and Cardassians, but also the Kam'Jahtae Klingons themselves, descendants of the Hur'q, longtime and implacable opponents of the Alliance. The game has 30 missions, including three tutorials. The game also offers a cooperative split-screen mode.