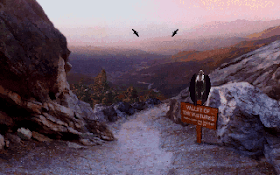 Genre: Adventure
Perspective: 1st-person
Gameplay: Graphic adventure, Puzzle elements
Interface: Point and select
Published by: Activision
Developed by: Activision
Released: 1993
Platform: DOS
The tenth game in the Zork Universe, if you count all the offshoots of the famous series, turned out to be rather ambiguous in terms of quality - but still very interesting in many ways at once. Including the presence of the almost forgotten exclusive version for hardware MPEG-decoders ReelMagic.
However, to begin with, a few words about the history of the creation of this project, which is also quite extraordinary. By the early 1990s, the management of Activision had already managed to safely bury the Infocom, which they had bought a few years earlier, together with all of its legacy - fortunately, another change of leadership in the person of Bob Kotik, who came to the captain's bridge of this corporation, led to plans to revive at least the main series of the famous text adventure, only this time with modern graphics. The world of Zork turned out to be a prime candidate for an experiment - alas, of all the authors of previous games, there was no one left in the company at that time (and the company itself turned into nothing more than a trademark), and the legendary Steve Meretsky rejected the offer of cooperation, remaining dissatisfied the quality of the low-budget Leather Goddesses of Phobos! 2 ". But for the new project Activision has already allocated a lot more funds: the creation of "Return to Zork" was spent nearly a million dollars.
Unfortunately, neither the game's designer nor its producer had ever worked with adventure games before, and had a very vague idea of ​​the history of the Great Underground Empire: the leadership of Activision took a lot of effort to achieve at least the appearance of "vigilance" of their project. It is easy to guess that this visibility turned out to be rather superficial: the game (and especially the documentation for it) is replete with references to the "letter" of the previous series, but the authors failed to convey the spirit of such. The subtle and witty irony, so brilliantly sparkling from the pen not only of David Liebling and Mark Blank, but also of Brian Moriarty with the aforementioned Meretsky, gave way to the more familiar, but much less elegant humor in the style of the television series of the 1980s, and the traditionally prohibitive complexity riddles were achieved rather by a deliberately unfriendly gameplay design. The technical director of the project even admitted that he deliberately set out to create a project that was hostile towards the user, offended by the critics who reproached the same “Leather Goddesses of Phobos! 2 "excessive simplicity of riddles ...
However, the unnatural logic of the puzzles "Return to Zork" is a separate and very sad song. Let's better touch on the merits of this game, the main of which is the brilliant and almost the best at that time (or even in history in general) use of FMV video sequences performed by actors, albeit from the second and third plan (from all the same television series), but on the other hand still very professional. Despite the static image, there is, of course, animation here, but there are no mise-en-scenes at all: the characters communicate exclusively with our invisible and mute protagonist (alas, without subtitles), and their whole game boils down to demonstrating various emotions through voice and facial expressions - despite all these limitations, the art of performers still makes an impression, and in the early 1990s it clearly looked like a technological breakthrough - along with great CD-quality music.
‹
›
Home
View web version