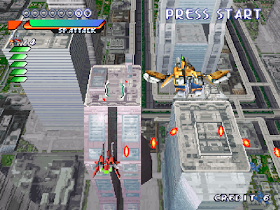 Genre: Action
Perspective: Top-down
Gameplay: Arcade, Shooter
Setting: Sci-fi / futuristic
Published by: SPAZ, Working Designs
Developed by: Taito Corporation
Released: 1997
Platform: PlayStation (PSX, PS1)
RayStorm is a shooting game made for arcade machines, later ported to the home Playstation and Saturn consoles. While there is no plot connection here, he is often seen as the spiritual successor to RayForce that had similar gameplay.
You have 2 weapons at your disposal: a volcanic cannon and a rocket attack. You can also carry out 2 special attacks using the blocking system in a special way. All graphics are in 3D, but the game mechanics are in 2D. There are 7 stages in total, each ending with a giant end boss.
‹
›
Home
View web version