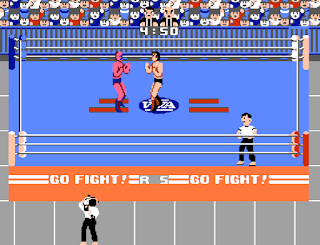 Genre: Sports
Perspective: Bird's-eye view
Visual: 2D scrolling
Sport: Wrestling
Published by: Nintendo of America Inc.
Developed by: TRY Co.
Released: 1987
Platform: Nintendo (NES)
The second wrestling game on the NES. Has a total of six flamboyant wrestlers who are fighting for the championship belt of the fictional Video Wrestling Association. Play for or against funny characters such as Fighter Hayabusa, Kin Corn Karn, Giant Panther and King Slender against the computer or a friend.
In a single player game, you need to defeat five opponents in a row, and then defend your champion title within ten battles. In two-player mode, the winner is the one who is the best after three rounds.
‹
›
Home
View web version