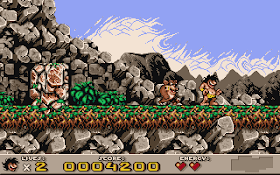 Genre: Action
Perspective: Side view
Visual: 2D scrolling
Gameplay: Platform
Setting: Prehistoric
Published by: Titus France SA
Developed by: Titus France SA
Released: 1993
Platform: DOS
Start from any level - enter from 01 to 14, instead of a password to the level.
So, Prehistorik 2 is the second part of a colorful, cartoonish platformer that tells about the difficult life of a caveman (although you can't tell by his eternal grin). Our shaggy Cro-Magnon travels to different countries, that is, levels, trying to satisfy one of the basic human needs. Simply put, he's looking for FOOD! In addition to food, he comes across a lot of all kinds of junk: gold, gems, playing cards, tools, cassettes, game consoles, clockwork toys, candlesticks and other anachronisms - but at the end of each level, all these items are sent to one cauldron. Our savage is a pragmatist: there is no time for aesthetics when every second bush tries to eat you. 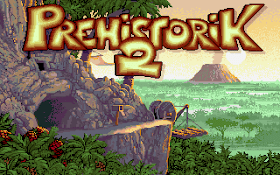 We have enough opponents: spiders, bears, lions, pterodactyls, giant lizards and other samples of flora and fauna of the Comiczo era. They differ not only in appearance, but also in behavior, attack tactics, and sometimes even intelligence, but they have one thing in common: vulnerability to being hit by a large stone club in the teeth. Fortunately, our savage owns this formidable weapon. Waving a club to him, and therefore to us, takes about half of the game, since it is not only a weapon against monsters, but also a tool for finding treasures, destroying some obstacles and discovering secret steps leading to various goodies.
There are a lot of these very secrets at the levels: as a rule, 25-30 percent of the goodies are hidden in the most unexpected places. In the game, it makes sense to pound with a club on each pebble that stands out. If a cloud appears at the site of the impact, it means that a huge ham, hamburger or bag of fries will soon fall on your head. Also, as strange as it sounds, monsters can hook you up to secrets. It is enough just to jump on their head, and you start jumping twice as high as usual, which means that you can jump to where you cannot reach on your own. A little tip: in the air, it also does not interfere with waving a club. If stars flew right out of the air, consider yourself lucky - keep pounding until a step appears to the secret platform.
The design of the world also deserves high marks, both for its drawing and for its complexity. The architecture of the levels is quite original, and it is far from easy to pass them. If half of the game you have to swing a club, then the whole other half is filled mainly with jumping and other acrobatic tricks. All worlds are unique, and you cannot confuse them with each other: mountains, wild jungles, dark forests, snowy wastelands - each has its own "face", is filled with original monsters and has its own peculiarity (for example, in a snowy world, due to a strong wind, you can only move crouching down).
Also, I can not fail to note the unusual roleplaying of revenge on the monster that bit you. The energy system in the game is classic. There are lives, and there are three hearts of health, which are taken away from you in close contact with a wild beast. But if you manage to kill the creature that took away your health, then six bones fall out of it. If you manage to collect them - get your heart back. True, if you run into a thorn or fall into a hole, then you cannot collect bones, as they say.
In general, the game Prehistorik 2 is more than a worthy continuation of the first part. Everything that was successful was developed, graphics and animation were improved, the bestiary was disfigured, and what was slightly abnormal was reduced to delightful absurdity! For example, now, to complete the level, you do not need to collect a certain amount of food, it is enough to find a giant ... plastic lighter (of course, it's clear: to light the burner under the cauldron and cook soup from diamonds, hammers and game consoles).
"YEAAA... My game is still working in 2021! " - the game is surprised at the start ... After all, the devils knew ... they knew that this game would be played in 2006, 2012, and 2021. And they had the right to this message to the future, since this game can be safely recommended to gamers of all ages and taste preferences, and especially to those who are tired of following a complex plot, but cannot stand stupidity. Prehistorik only seems primitive and uncomplicated. In fact, this simplicity is justified, cleverly planned and comically presented. If you have not played yet - pay attention. Relaxing hardcore is not an oxymoron or fiction, this is Prehistorik 2.
‹
›
Home
View web version