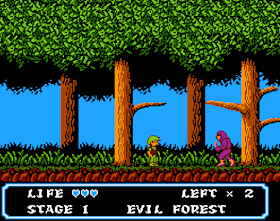 Genre: Action
Perspective: Side view
Visual: 2D scrolling
Art: Anime / manga
Gameplay: Platform
Published by: Hect Co.
Developed by: Hect Co.
Released: 1992
Platform: Nintendo (NES)
A very detailed adventure game. We play as a guy named Ricky Slater. The insidious Count Crimson has kidnapped all the villagers, including the family of our hero, and threatens them, forcing Ricky's father to use the powerful Moon Crystal for evil deeds. Ricky, without delay, goes to rescue relatives. Soon the mysterious girl Rosina appears, she is somehow connected with Crimson, but how? ... As you understand, the plot in the game is interesting, and is presented in the form of beautiful scenes no worse than in Ninja Gaiden. The gameplay did not disappoint either. The hero smoothly moves through the levels, almost like the Prince of Persia clings to the ledges, powerfully hits enemies with a sword. True, our Ricky is unfolding slowly, but it doesn't matter. With the Prince of Persia, the game is also related to the obstacles at the levels, overcome by pressing the right button. On locations, you can find improvements, such as pumping the sword and double jump. The game was released only in Japanese, but there is an English translation.
‹
›
Home
View web version