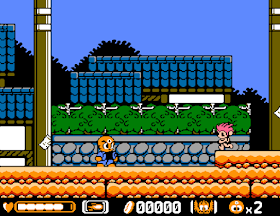 Genre: Action
Perspective: Side view
Visual: 2D scrolling
Art: Anime / manga
Gameplay: Shooter
Published by: Tomy Company
Developed by: Natsume Co.
Released: 1992
Platform: Nintendo (NES)
The adventures of a three-eyed boy, a character in manga and anime. The villain kidnapped the main character's girlfriend. The main weapon of the hero is the third eye, from which he effectively shoots bullets at enemies. If you hold and hold the attack button, the hero will summon a magic spear, with its help you can climb higher. Just jump on the spear until it flies away and it freezes in the air. By shooting the dropped coin several times, you can increase its value. In the store you can buy new weapons (toggle in pause mode), a bird (saves you from one fall) and life. Five levels will fly by for you in an instant in this exciting game.
‹
›
Home
View web version