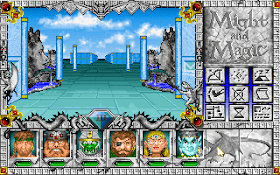 Genre: Role-Playing (RPG)
Perspective: 1st-person
Pacing: Turn-based
Gameplay: Shooter
Interface: Direct control, Multiple units / characters control
Setting: Fantasy
Published by: New World Computing
Developed by: New World Computing
Released: 1991
Platforms: DOS, SEGA Genesis / Mega Drive
Thanks to Might & Magic III: Isles of Terra, the M&M epic is, in fact, widely recognized; the first two parts could not complete this task due to a number of circumstances: mediocre graphics, monotonous and boring gameplay, as well as a shallow and overly mysterious plot. In MM3, the backstory of events was finally revealed, and it also became clear who these Korak and Sheltem were, as well as much more. 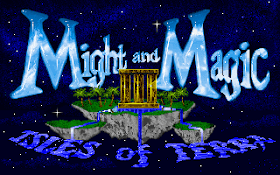 It all starts with the fact that a group of six adventurers (according to the plot, this is Sir Kanegem (does he really resemble someone?), Craig Hack, Resurektra, Maximus, Dark Shade and Castor) discover several letters from Korak. After reviewing their contents, they realized that they were entrusted with the task of helping Korak defeat Sheltem. How this event will end is entirely up to you. It should be noted that, in addition to the introductory address, the letters contain a large number of notes relating to almost every area where you will visit.
In terms of game mechanics, everything is generally similar to what was in MM2. By default, we are given the six above-named heroes, but in any city you can fire any of them and take a new one into the team. You can also hire up to two mercenaries, which require a daily coin payment that increases with their level. There are five races in the game: human, elf, dwarf, gnome and half-orc (hello MM9!), Each of which has its own characteristics, such as initial resistance to magic or the ability to steal. To the classes that existed in the previous part (Knight, Paladin, Archer, Magus, Thief, Cleric, Barbarian and Ninja), two new ones were added: Ranger (initially has the Pathfinder skill) and Druid (combines the magic of Magus and Cleric). Each class has access to certain types of weapons, armor, and also spells (for example, the Magus can never elegantly demolish the heads of enemies with a katana, but the Ninja also cannot throw a fireball at enemies).
Certain changes affected additional characteristics of items: before there was a list of about 250 items, and each of them had strictly specific properties. In MM3, a new system is used: there is a certain list of items (weapons, armor and miscellaneous), and the first two types can have two types of modifications: firstly, their performance is influenced by the material from which they are made, and secondly, their special magical property (fire damage and others). Thus, the likelihood of possible combinations is truly enormous.
The gameplay also did not remain without a number of significant changes. The new interface greatly facilitated the game process - nine buttons appeared on the side: melee, shoot a bow, spell book, break, view Korak's notes / task list, time and date, kick out the player, view quick help on the squad and rest. During the battle, some buttons are replaced (for block, escape from the battlefield, and more). And, as you may have guessed, the presence of buttons implies mouse support, and all this taken together makes this game quite playable for those who are used to a "modern" interface or simply do not like a purely keyboard style of play. It should be noted that it was in this part that the display of the characters' faces appeared, which has become a classic in the M&M series. By clicking on any of the characters, you can go to the description of its characteristics and skills, and from there - to the inventory and so on. Among other things, another important change has appeared: before, in order to detect monsters, you had to "step" on the cell where they are located, and now they themselves will see you and briskly run towards you. Yes, yes, now the battles do not take place in a mode separate from the game world, but directly here and now (i.e. while you are fighting one group of enemies, others at this time will approach from all sides and wait for their turn). However, the number of enemies with whom you can fight in close combat is limited to three: if you killed one of them, then another will immediately take its place, if it is nearby.
As for the graphics, here, finally, you can forget about the ripples in the eyes from the once fashionable 16-color EGA: the image is now much richer in terms of the palette, and its resolution has become larger.
Summing up, what can you say? Might & Magic III: Isles of Terra is a wonderful RPG that has many advantages and a special charm. I am sure it will appeal to true fans of the genre, and fans of the M&M world - in particular.
‹
›
Home
View web version