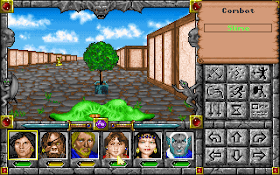 Genre: Role-Playing (RPG)
Perspective: 1st-person
Pacing: Turn-based
Gameplay: Shooter
Interface: Direct control, Multiple units / characters control
Setting: Fantasy, Sci-fi / futuristic
Published by: New World Computing
Developed by: New World Computing
Released: 1992
Platform: DOS
Clouds of Xeen is the fourth installment of the Might & Magic epic. Together with its successor, Dark Side of Xeen, it can form one big, unified world - World of Xeen - undoubtedly the best game ever. Another fun fact is that MM4 was one of the very first games to come out on CD.
The plot takes place on a flat rectangular planetoid called Xeen. Life on this land was peaceful, and the glorious King Burlock ruled over it. But one day, someone with incredible power appeared, and in the shortest possible time he named himself Lord Xeen, the sole ruler of the entire kingdom. In confirmation of his words, he sowed fire and destruction. Only a small team of adventurers, that is, we, decided to stand in his way. 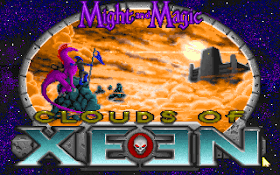 So, in comparison with the previous part, there are practically no technical changes. The MM3: Isles of Terra engine was taken as a basis, so the overall design of the levels is pretty similar. The graphics have become a little more detailed, animated videos that appear when visiting various institutions, as well as when entering a dungeon / tower, are widely used. The system of battles has remained unchanged: long-range and melee combat is available to us, and with the latter, we lose the ability to move. In close combat, the number of opponents is limited to three, the vacated places are immediately occupied by the enemies who arrived in time; the battle takes place in turn-based mode.
The world of Clouds of Xeen provides more freedom of action than in Isles of Terra, where the peculiarity of the planet, arising from the name of the game itself, served as a noticeable limiter: these were indeed islands, and it was not always possible to swim between them. In MM4, on foot, you can reach almost any place. And in general, the world in which our heroes have to travel is larger than the lands of Terra. The size of cities has also increased significantly, in part due to the ability to walk inside buildings. An interesting innovation was the possibility of acquiring your own castle with an impressive interior space. In the course of the development of the plot, it will be completed and from dusty empty ruins it will turn into a quite decent palace, worthy of any noble feudal lord. But that's not all. We have been given the opportunity to travel not only on land and water, but in places and, literally speaking, in the clouds! True, one cannot do without a levitation spell.
Races, classes (ten in total) and skills remain the same. In total, there are five races in the game: human, elf, gnome, dwarf and half-orc. In total, a team can have six characters, but there is always the opportunity to kick out at least all six and replace them with a new party. But it will no longer be possible to take mercenaries to ourselves - and we will not see them until the eighth part of the epic. As for the list of spells, it has been replenished with a number of new items, sometimes very useful (for example, Golem Stopper, without which going against a diamond golem is an empty matter); some spells, on the other hand, have disappeared (including such wonderful ones as Duplication). There are three schools of magic, as in the third part: magic of wizards, clerics and druids.
A number of positive changes in the game interface became a pleasant surprise. Firstly, the "Cartographer" skill not only made it possible to automatically fill in the main adventure map, but also made it possible to display a small part of it on the minimap, previously the latter was enabled only when using the "Wizard Eye" spell. Secondly, the noticeably expanded inventory was broken into five parts: weapons, armor, jewelry, various things (scrolls, torches, ropes, and others) and plot items now lie separately. Moreover, now those items that this character cannot equip are marked accordingly. Novice players can breathe freely - now they definitely won't have to sort out a mountain of weapons until they are convinced that the magician can only pick up a dagger and a club ... Descriptions of each place have disappeared, but auto-notes have appeared, and viewing tasks has become much more convenient.
Summing up, we can say that Might & Magic: Clouds of Xeen is one of the best representatives of the RPG genre for its time. If you are not an adherent of modern graphics and love this genre, then be sure to try this great game. And if you are a fan of the M & M epic - even more so.
‹
›
Home
View web version