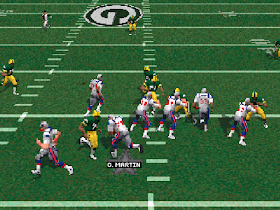 Genre: Sports
Perspective: Bird's-eye view
Visual: 2D scrolling
Sport: Football (American)
Published by: Electronic Arts
Developed by: Tiburon Entertainment
Released: 1997
Platforms: PlayStation (PSX, PS1), SEGA Genesis / Mega Drive
Electronic Arts has recruited renowned commentator John Madden to work on the next version of the American football simulation game. Version 98 includes new defenses, advanced customization (including player creation and transfer), and advanced AI. As before, the player will have to go through the entire season, as well as play (and win) the Play-Off and Superbowl. Traditionally, the game is presented in the form of TV broadcasts, with all the analyzes and reports and the full composition of the teams of the 1997-1998 season, the teams of the previous seasons, which are united in a large group, are not forgotten.

To enter codes, you need to log into the Front Office and select the Cleate A Player option. Then enter any of the following codes and save the name. When you return to Exhibition mode and Vs.Screen, you will be able to select previously "hidden" commands.
‹
›
Home
View web version