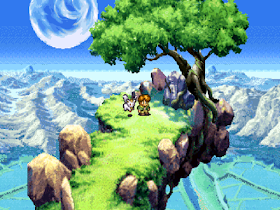 Genre: Role-Playing (RPG)
Perspective: Bird's-eye view
Art: Anime / manga
Pacing: Turn-based
Published by: Working Designs
Developed by: Game Arts Co.
Released: 1999
Platform: PlayStation (PSX, PS1)
The architecture of the PlayStation and Sega Saturn consoles has increased the gamut of colors, more complex visuals and improved sound. In-game videos have also been added to the game. Moving along the storyline, the player communicates with non-player characters and completes tasks. In the original version of the game, a system of random battles was used, which implies that opponents are not visible in locations and they attack the squad unexpectedly. In the game Lunar: Silver Star Story Complete, monsters, on the other hand, are visible and the battle begins only upon contact with them, thanks to which collisions can be avoided.
Many elements of the combat system have been carried over from Lunar: Eternal Blue, including an automatic combat mode in which the character moves and performs actions on his own, without the participation of the player. While in combat, the player can attack the enemy, move around the battlefield, use magic or objects, stand still, defend or escape from the battle. The character can be equipped with various weapons such as a bow, sword, staff, sling, and others. According to the weapon used, the character can attack either closely (for example, when using a sword), or from a long distance (when using a bow). The battle is won when the player's team kills all the monsters on the screen. As a reward for winning, the player is given experience points, with the help of which the character develops, gaining levels and, thereby, developing the player's abilities. To confront more powerful enemies, the characters of the game need to find, buy or get more powerful equipment for defeating monsters, as well as have a higher level of development.
Almost every character in the game has a certain set of techniques and magical skills. For example, Alex is trained in the art of swordsmanship. Later, he has the skills of dragon guards. The white dragon gives him the power to completely avoid one (any) magical attack. The skill received from the blue dragon fully restores the life points of the squad and heals all negative statuses. The red dragon teaches Alex how to cause a meteor shower on the battlefield. And finally, the black dragon gives him the ability to instantly destroy all enemies. Mia and Nash are magicians, each of whom uses the energy of a certain element. Mia rules fire and water, and Nash rules lightning. Jessica and Lunar are the squad's healers, healing and reviving allies during and after combat. Kyle, like Alex, is a warrior who wields a good sword. Unlike Alex, Kyle has at his disposal fewer moves and magic points to perform them, but is not inferior in the amount of damage done. Ramus is not endowed with any unique techniques. Nell is a support character that cannot be controlled during combat. Depending on the strength of the enemies, he can revive the character or heal negative statuses.
Also in the game, the system of fighting with bosses has been redesigned. For example, many of the characteristics of a boss: the number of health points, attack and defense power, spell resistance - depend on Alex's level. Thus, if Alex's level is 13, and the multiplier for health points is 80, then the boss will have 1040 health points. The developers did this to prevent players from gaining additional levels, ensuring an easy victory for themselves: as the level of the protagonist increases, the bosses also become stronger.
The game has a system of instant movement between cities. She becomes available when, according to the plot, the Galleon turns into the Magic Emperor. In the Burg, at the Dragonmaster Dyne monument, Lake appears and gives Alex an item called white dragon wings. With this item, Alex and his team can visit the cities in which they were previously. Another unique item is the mirror, which allows you to see all the videos of the game. This mirror can be purchased from Ramus in Meribia, or received as a gift when Alex becomes Dragonmaster.
‹
›
Home
View web version