Lords of the Realm II (DOS) 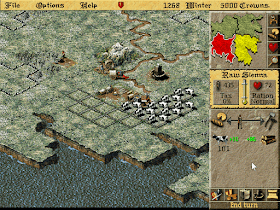 Genre: Strategy / tactics
Perspective: Bird's-eye view, Top-down
Visual: Isometric
Pacing: Real-time, Turn-based
Gameplay: Real-time strategy
Setting: Europe, Medieval
Published by: Sierra On-Line
Developed by: Impressions
Released: 1996
Platform: DOS
1268 AD,
The king is dead ...
In this troubled moment, cunning, insidious, greedy and simply bad feudal lords decided to saw the kingdom apart. With the king alive, they quietly sat in their counties and provinces, and only in sweet dreams did they see themselves as sole rulers. But now the king is dead, and only they themselves can stop them from internecine wars. Knights, barons, earls and even bishops all grappled with each other in the hope of gaining the crown. And you are one of them. 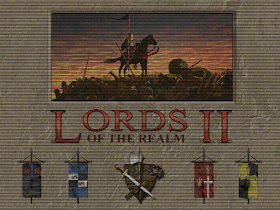 Welcome to feudal Europe!
In the game Lords of the Realm 2 you can feel the burden of everyday life of an ordinary feudal lord. Here you will have to lead literally everything: the construction of castles, the improvement of the life of peasants, the extraction of resources, the production of weapons, the recruitment of the army, and, finally, you can personally lead your troops in battles and sieges of enemy castles.
One of the main features of Lords of the Realm 2 is a high-quality combination of two game modes - turn-based construction and reconnaissance and combat, which takes place exclusively in "real time".
In turn-based mode, you take turns with the enemy (s) to develop your kingdoms and scout the surroundings. From the very beginning of the game, you will need to feed, water and employ your peasants. Competent cattle breeding and wheat cultivation will ensure a healthy and well-fed existence for your subjects. And do not forget to buy a couple of barrels of good old ale, without which even a well-fed life is not life.
Are the peasants fed up? Are you healthy? Are you satisfied? Excellent! Now let them go to work in the name of the English Crown! Moreover, there is where to work: in the smithy you need to forge weapons for a victorious war, in the quarries you need to get stone to build a well-fortified castle, in the mines you need to get iron ore, unplowed fields need to be plowed ... in a word, there is a lot of work.
While the men are working in the forges, in the fields and logging, you can try to establish diplomatic relations with your rivals. In Lords of the Realm 2, you can make alliances, give gifts, write compliments and even ... insults! The most interesting thing is that you can praise and insult your neighbors with your own hands - the game allows you to compose the content of the letter that you want to send to your neighbor / ally / enemy. It is clear that the most relish from such a diplomatic system can be obtained only in multiplayer mode, but in a single player game diplomacy greatly adds to the atmosphere, since all the letters of your neighbors are "voiced" by them themselves, and they can not only be read, but also listened to.
Now that you are fully prepared for war, all you have to do is prepare your own population for it. You need to be careful when you call the peasants into the army, because the more people you call for military banners, the more the mood of your population will fall.
Battles take place in real time. At first glance, it may seem that the battles in Lords of the Realm 2 look exactly like in the same Warcraft, but there are still some subtleties, if not in appearance, then at least in the gameplay. For example, soldiers who have clashed in battle are almost impossible to disengage from one another. Each type of troops has its own advantages: spearmen inflict additional damage to cavalry, swordsmen are mothballed in strong armor, which protects them from almost all types of weapons, except the mace. In general, there are subtleties here, there are.
Sieges of castles. Perhaps this is the most interesting game mode in Lords of the Realm 2. The siege is divided into two stages: preparation and the siege itself. Before attacking the castle, you are invited to prepare siege weapons for this action: battering rams, siege towers and catapults. The more you "order" weapons, the more you will need turns in turn-based mode to prepare for battle. It is difficult and interesting to besiege castles. However, as well as to protect them.
By the way, the game provides for the so-called "Skirmish" mode, in which you can immediately play out any battle or siege of the castle, without any construction and development of your kingdom.
What other advantages can be noted in the game? Lords of the Realm 2 has great music, beautiful graphics and videos, as well as nice design, stylized as "those times". By the way, about the videos. After the great introductory video, you will probably think that you will have a grandiose campaign in which you will take under your banners old England, and maybe even the whole of Europe! And here a big and unpleasant surprise awaits you, which is also the main drawback of the game - the campaign in Lords of the Realm 2 is just a set of cards that have nothing to do with any plot. Suffice it to say that you will start your first mission in the campaign in ... Australia! Yes Yes! The island on this map painfully resembles the good old green continent, and the names and boundaries of the counties are an exact copy of the names and boundaries of the states of the Australian state. Here is such an English humor (the creators of the game are English).
To summarize, I want to say that, in my opinion, Lords of the Realm 2 is an outstanding strategy. Yes, there is no sensible campaign in the game, but everything else in it is worked out to the smallest detail. The game is challenging, original and interesting. And the decoration of the game creates some kind of its own, deep, unique atmosphere that distinguishes and elevates Lords of the Realm 2 above the mass of similar strategies.
‹
›
Home
View web version