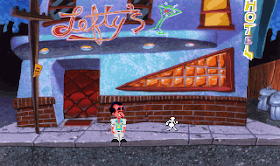 Genre: Adventure
Perspective: Side view
Visual: Fixed / flip-screen
Gameplay: Graphic adventure, Puzzle elements
Interface: Point and select, Text parser
Narrative: Adult, Comedy, Romance
Published by: Sierra On-Line
Developed by: Sierra On-Line
Released: 1987
Platform: DOS
What kind of characters and adventures have not been created by the developers of computer games. Either we heroically save the Earth / kingdom / future (emphasize the necessary), then we unravel the secrets, then we are looking for missing people / objects. But Leisure Suit Larry in the Land of the Lounge Lizards is an adventure about ... ahem ... arranging your personal life. 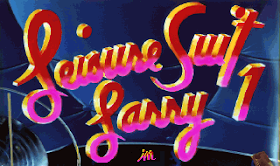 The player will have to take control of a hero of a very special kind. And it's not even about his unluckiness or methods of solving puzzles (here those familiar with the classics of the genre are unlikely to be surprised). The goal of a man named Larry Laffer is to have a good night in "Land of the Lounge Lizards" (free translation from English. "Land of the Lounge Lizards"). And Larry will definitely achieve his goal, because he is an (not) aging womanizer, a veteran of the love front and just a charming girl. He always looks gorgeous. His costume is the latest fashion trend (70s). His well-groomed, but very thinning in the area of ​​the temples and the back of the head, the head of hair clearly demonstrates the excess of androgens in the body. Its nose is big enough to stick in all the wrong places. And his natural charm and ability to conduct a conversation will “surprise” the beauties of the night city of Lost Wages (literally from English - “City of Lost Wages”) more than once.
The original game was created in 1987, had a text interface and rather meager (compared to the remake) graphics. Since the early 90s, Sierra began to transfer the most successful quests of the 80s to a new "engine". The '91 Leisure Suit Larry had a full-fledged graphical interface and mouse support, and it was drawn with the expectation of 256-color VGA adapters.
Speaking of design and design, Larry is the direct heir to the textual SoftPorn Adventure (1981). Don't be confused by the “porn” root in the ancestor's name - the game is not at all geared towards satisfying those hungry for strawberries. It would be more correct to call the gameplay “ironic erotica” (well, or “parodic obscenity” - as it is closer to anyone). There are a lot of jokes “below the belt”, but Larry is still a rather funny quest that has much more in common with other works of Sierra than with things that are usually labeled with the inscription “For adults only!”.
Among the shortcomings, one can note the scourge of graphic adventure games of that time - the non-obviousness of pixel hunting (the graphic resolution is very small, game screens are drawn in a peculiar way, and interactive objects scattered across locations are far from always easy to notice) and some unpredictability of the consequences of the protagonist's actions. For example, you have no idea how many deadly dangers await a person in the "Lands of Idle Lizards"! It is especially scary that some "traps" work like time mines. So, without using contraception during a date with a representative of the “ancient profession”, you will get “game over” only when you go outside - well, not in a couple of years. Although, frankly, against the background of puzzles from Goblins, Larry's actions seem very understandable, and mistakes like the one described are better made in computer games than in real life.
Separately, I would like to say a few words about the Russified version, which was played by most of our compatriots who got acquainted with Leisure Suit Larry in the distant 90s. Having redrawn most of the dialogues and phrases on duty, SAE and MVK (the same guys who translated Gobliins), using their native slang, spoiled the original somewhere, somewhere, on the contrary, made a successful translation, but we can say that the localization task was successful coped.
Whether to play Leisure Suit Larry is up to you. If you are a principled opponent of the fact that the topic of relationships between the sexes can be treated lightly and ironically, then no game can convince you of this, and Larry is no exception. If you do not mind trying on a snow-white "Leisure Suit" of a middle-aged seeker of love adventures, you may like this game. As a quest (let's move away from the focus) Larry is certainly good and can be quite adequately perceived by adolescents and adults. I think that now such a quest would hardly impress me, but then (when the voice was thinner, and democracy - more) I liked it.
‹
›
Home
View web version