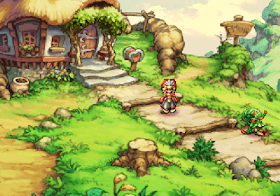 Genre: Role-Playing (RPG)
Perspective: Bird's-eye view
Visual: 2D scrolling, Isometric
Art: Anime / manga
Gameplay: Action RPG
Setting: Fantasy
Published by: Square Electronic Arts L.L.C.
Developed by: Square Co.
Released: 2000
Platform: PlayStation (PSX, PS1)
The gameplay is in many ways similar to the previous installments of the series, although it differs in a number of innovative moments. The main difference is that the player is free to change and transform the fictional world at his own discretion, using the so-called "artifacts", create various cities, dungeons and other locations, called "lands" here, and then visit them in random order to explore ... The plot is also fickle and is not required at all to complete the game.
The plot of the game is that the Great Mana Tree was destroyed during the Mana Wars and now the main character will have to ensure its growth and "purification", collecting artifacts around the world that are "preserved" lands, dungeons, castles, etc. In addition to the main storyline, the game has several more plots that have nothing to do with the main canvas. At the same time, the number of tasks and incidents with the main character is huge and varied. Not all tasks need to be solved with the help of combat, although the number of fights tends to infinity.
The game has a huge crafting system. The hero will have to educate students (participating in the relevant plots), create weapons, armor, catch monster eggs and grow them, grow vegetables and fruits in the garden, create combat golems, musical instruments (analogue of magic).
‹
›
Home
View web version