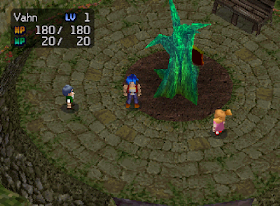 Genre: Role-Playing (RPG)
Perspective: Bird's-eye view
Art: Anime / manga
Pacing: Turn-based
Published by: Sony Computer Entertainment America Inc.
Developed by: Prokion
Released: 1999
Platform: PlayStation (PSX, PS1)
Long ago, God sent Seru to help people. Seru itself is a stone, albeit endowed with an independent mind. But a man, uniting with Seru, acquired paranormal abilities, extraordinary strength and could lift large weights ... And so people and Seru lived in union without knowing worries. Until the ominous MIST appeared. Appeared out of nowhere and invaded the continent of Legaia. And Seru rebelled against people, they captured their minds and turned them into insane monsters ...
Initially, you play as Vahn, who lives in Rim Elm. The city is surrounded by a wall that protects it from fog. One fine day, hunters return to the city and, moreover, bring the main thing on a stretcher. An autopsy shows that he was killed by monsters :)))
Suddenly, all of a sudden, demons begin to burst into the gates of the city. In the midst of the crowd, a strange-looking monster materializes and predicts an imminent end to all residents. Following this, some creepy devastator sprays a part of the wall and fog floats into the city….
It's not hard to guess what happens next. While the ‘Seru’ monsters are eating the inhabitants of Vahn notices that they are, the monsters bypass the city center, where the mystical Genesis Tree is located. He hurries there and suddenly the tree comes to life, appealing to Wahn's subconscious. Wahn touches the tree and it gives him Ra-Seru (like Ali's Armlet of Beyond Oasiss) - Meta, which gives Wahn great power ...! Having transferred Ra-Seru, the tree blooms while emitting such energy that not a trace remains of the fog within a radius of ten kilometers.
At the end of this sad backstory, Wahn embarks on a journey, the main goal of which is to revive other Trees, while investigating the causes of the fog along the way.

The figures of the damage done, the concept of the characters' encounters, even their manner of movement can be traced. The rest of the game is original and certainly interesting!
The plot develops in a very, very funny way. In addition, which is very valuable, he is not straightforward and, often, you return from the end to its beginning.
Characters have radical differences in parameters. What separates them. The battles are three-dimensional and resemble Tekken. the attack is built either from a combo series or from a magic attack.
The combo system is very interesting. This is not a rotten MK with its miserable set of punches! There are so many combinations of attacks (unique for each character!) That even a dozen compliments of this difficult game won't be enough for you to find them honestly! Therefore, after the first pass, I advise you to check out Walkthrough ..
There is a so-called AR bar with a number from 1 to 100. This is your ‘combat power’. When using different combos, it decreases. And it grows with any attacks except combo series. It can also be quickly recruited by using the Spirit function. At the same time, the attack strip also increases by one turn. This is generally the main thing. Its length depends on the character and grows with the level. It literally ‘nests’ combinations of individual hits or well-known combo series. And how many blows will fit in this line of blows and will be inflicted on the face of the foe ... It's hard to imagine, and it is not necessary. It is easier to try it yourself and feel the full breadth of the possibilities that open before you.
Direct attacks with hands and feet are of two types: simple_intelligent_strikes or Arts. In turn, arts are subdivided into several more subclasses ...
You can learn different combos either yourself or from special books, or from the monks of Biron (local fans of karate and bodybuilding) or in other interesting ways. In general, combining these combos into a combo from a combo is very addicting. Sometimes the number of hits goes off scale for indecent values ​​and takes a semblance of brutality.
Magic, in my opinion, is no less interesting. The magic itself can and should be obtained exclusively from ‘Seru’ monsters. They can be identified by the icon next to their name. To gain magic, you need to defeat a monster, and not with magic or Hyper Arts! The character who inflicted the decisive blow with a certain amount of luck will be able to use the power of the creature. Thus ALL magic is visualized as summons! Have you seen this anywhere? And, moreover, their number cannot but rejoice! You think 5-10, well 15 is the maximum? Yeah, it was not so ... - 31! And moreover, there are some which are very difficult to dig.
Separately, it is worth noting that with the frequency of use, the summon is pumped from level 1 to level 9, increasing power and acquiring a mass of bonuses. And if we add to this the fact that each summon is ‘unique’? ... No comment. Worthy of praise.

I would especially like to note the complexity of the game. It is high in the most literal sense. Sometimes opponents knock you out in full. It is especially difficult at first when you are traveling alone.
For example: I almost got hysterical when, with the usual bravado (although not without caution), I got Game Over TWICE in the FIRST dungeon! And it doesn't get any easier. I especially want to mention the bosses. This is a real challenge where you hang by a thread clinging to the last bottle of vodka or a can of canned food! (to restore life, what did you think about?)
If you are not powerful enough, they will beat you in a couple of rounds. There are no jokes a la Final Fantasy like ‘took every one’s life off? .. well, nothing… I still have mega-elixirs. Here they shoot everything at once. However, this complexity does not make the game boring or impassable.
On the contrary, such a healthy challenge is very enjoyable and rarely seen in modern games.
The disadvantages include the fact that they give very little money, while it may seem trite, they are almost the only real means for equipping your wards. Moreover, there is always not enough money. And so you have to use tricks or stupidly walk to endure monsters. Again, the challenge! One of the glaring drawbacks in my opinion is the practical uselessness of magic due to the insane high cost of using it. Despite the fact that the means of replenishing the MP cost an inordinate amount of money. For example, summon a fireball (even if it is powerful) for 15 of all mana ??? This is an impermissible pleasure, because the game does not have a tool for restoring HP / MP on the save point at all! .. like that .. so take care of vodka and canned food!
Legend of Legaia also has built-in mini-games. Moreover, they are very funny and original. Forget collecting cards! Instead, become the ultimate fighting champion, disco queen or Baka Fighter record holder !!! There is such a thing. Moreover, you receive your winnings in tokens that can be exchanged for prizes. There is also hypertrophied fishing (the developers are probably very fond of Breath of Fire!).

The games can be recommended to everyone. The pleasure is guaranteed. High difficulty and fascinating plot, lots of humor and sub-quests, original game system and mini-games.. What else do you need for a good game ?! And it should be noted that all this pleasure takes one CD.