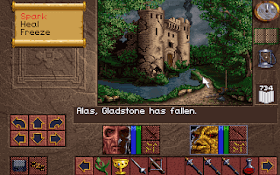 Genre: Role-Playing (RPG)
Perspective: 1st-person
Pacing: Real-time
Gameplay: Puzzle elements
Setting: Fantasy
Published by: Virgin Games
Developed by: Westwood Studios
Released: 1993
Platform: DOS
Before the company started riveting various clones, it made very good games. And mostly quests and RPGs of the highest quality. Westwood created the Eye of the Beholder trilogy, a first-person RPG based on the AD&D system, in which a team of four heroes had to save the city of Waterdeep from the invasion of dark forces, the source of which was deep under the city. 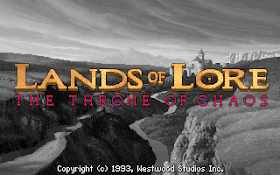 After completing a trilogy that enjoyed a well-deserved success, the Westwood team took on a new project, Lands of Lore. This game is created on the improved Eye of the Beholder engine. A lot can be said with this simple sentence. And quite good for those times graphic performance, and walking "in the cells", and graphics from the first person, and many more things, including the fact that the action of the game takes place in real time.
The game has an intuitive interface and a role-playing system that allows even a person who plays a first-person role-playing game for the first time to get used to it very quickly.
The plot of the plot is initially pretty simple. The evil sorceress Scotia has obtained a certain artifact Nether Mask, which allows her to transform into any creature. King Richard is clearly not happy with the fact that various evil spirits just roam the cities and villages in droves, getting closer and closer to the capital, and he sends you on a mission to save the kingdom, destroy the crazy sorceress and take away the artifact from her, in any order of performing these actions.
The plot changes constantly, each time setting some local tasks for the heroes (one main character and two NPCs). The player almost always knows what to do and why. One problem can be solved in several ways. For example, it is quite possible to agree with the swamp inhabitants by completing the task of their leader, or it is possible to cut them out without exception.
Locations are a kind of labyrinth, which contains various puzzles, objects and monsters. The good news is that these labyrinths do not have a standard structure or size, but at the same time the logic of construction is preserved, that is, in the three-story "White Tower" all three levels have the same size and shape. The excellent map, on which any little things are entered, be it traps, chests or levers, simplifies orientation even more.
The "walls" of the labyrinth are drawn in sufficient detail, as, indeed, everything else in this game. Monsters of the same type are still slightly different in color, which adds a little more liveliness to the overall picture. Unfortunately, the name of the monster can be found only in the dialogues of the heroes and nothing else, and you can find out what is most effective against it only in battle.
It is also worth noting the excellent quality of the videos. Those who have seen the videos of Eye of the Beholder 2-3 will understand. Large, traced to the smallest detail of the characters' faces, excellent animation of movements and amazing special effects for those times.
To simplify the gameplay, the developers refused to create a character and simply provided four characters to choose from. To simplify, this is a Mage, Warrior, Thief and a certain character who knows a little bit of everything, who is usually called a Ranger or Paladin.
The hero is versatile. He can progress freely in the Fighter, Rogue and Mage classes. These abilities grow with use: when the red bar reaches the right border, the hero raises his level in this class with all the ensuing consequences. There are also parameters Protection and Might, which, as is clear, are responsible for the degree of protection and the amount of damage inflicted by the character. There are no physical characteristics or any skills - everything is as simple as possible. The parameters change depending on the initial choice of the character and what he is wearing.
There are only six spells in the game, and any character can use them, if only mana is available. Spells, as in the Wizardry series, can be specified with power. Moreover, there are only four attacking spells, so it is rather difficult to get lost in them.
The game does not provide for the death of a character. When his lives reach zero, he simply passes out. Only if all characters are unconscious will the saved game have to be loaded.
‹
›
Home
View web version