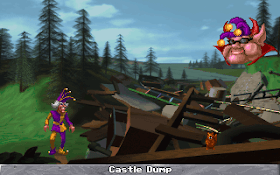 Genre: Adventure
Perspective: 3rd-person
Gameplay: Graphic adventure, Puzzle elements
Interface: Point and select
Setting: Fantasy
Published by: Virgin Interactive Entertainment
Developed by: Westwood Studios
Released: 1994
Platform: DOS
The Legend of Kyrandia: Malcolm's Revenge has completed a magnificent series of quests about a fairyland that has gone through hard times more than once, but good, as you remember, invariably won, and Kyrandia existed in relative peace and tranquility until the next series of troubles. In the first part, we saved the magical lands from the evil attacks of the royal jester Malcolm, in the second - together with the young sorceress, we prevented their complete disappearance.
This time, the main character is played by the same jester who played the role of the evil genius in The Legend of Kyrandia, Book One. As a result of a magical duel with Prince Brandon, Malcolm was turned into a stone statue and thrown into a landfill for uselessness. Once the statue was struck by lightning, which brought the jester to his senses. Freed from the spell in such a miraculous way, our hero immediately went all out. True, now he wants not only to get even with his offenders, but also to dispel the existing myth that it is he who is the murderer of the former king and queen. Armed with a jester's wand, having two advisers in the form of a bad and good side of character, collecting improvised means in the dump in the form of sharp nails and shards of bottles (and in what other way can you express your disagreement with the forced arrest at the palace dump, if gates, poking with nails on oncoming passers-by and setting up other unpleasant tricks around?), Malcolm will go to look for a way to escape from the hated Kyrandia, in order to plan the tactics of a "buffoonish offensive" in the distance.
The third part turned out to be different. But this does not mean that the sequel has lost the charm of the first two games in the series - it is just a new story told in a slightly different manner. Graphically, the game has changed significantly. The inventory is back to the look we saw in Book One. True, something new was added - now points are awarded for every bad act Malcolm does (and, of course, he will do his best to maximize his ability to annoy others), and in dialogues the jester can either lie, or tell the truth, or stick to neutral positions in the conversation. The two sides of Malcolm's contradictory nature - good and bad - will manifest themselves simultaneously closer to the end of the game, and then the player will be asked to make a choice, which, accordingly, will affect the ending itself - whether the story will end happily or will someone still lose ...
Admiring the familiar and beloved views of Kyrandia in this part will not work - everything has changed here since the last adventures; you can only meet old acquaintances ... who are oh so angry at Malcolm. There will be no warm welcome, no friendly chatter about the days gone by, but you will find a huge amount of humor, comical situations, non-trivial use of the most ordinary - at first glance - objects and a lot of new acquaintances - from rather ordinary to very unexpected. So if you are a fan of joking and laughing - put on a clown cap and take a special clown wand in your hands - all other serious things will wait, because you are given a unique opportunity to come off to the fullest!
‹
›
Home
View web version