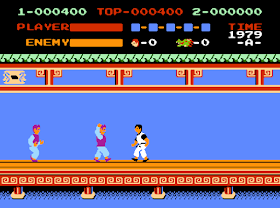 Genre: Action
Perspective: Side view
Visual: 2D scrolling
Pacing: Real-time
Gameplay: Beat 'em up
Interface: Direct control
Narrative: Martial arts
Published by: Nintendo of America Inc.
Developed by: Irem Corp.
Released: 1985
Platform: Nintendo (NES)
Based on the 1984 movie Wheels on Meals, starring Jackie Chan and Sammo Hung.
You play as Tomas - a dude in a kimono and slippers. Your friend-thief, Sylvia, was kidnapped by a certain Mr. X and is imprisoned in his estate. So you will need to get to the very top of the building - this is where Sylvia is located. In the American and English versions, the story is slightly altered - unknowns attack Thomas and Sylvia, and only then, you will have to look for a girlfriend.
Go through all five stages to free the poor thing and kick the kidnapper's ass. As you can imagine, the main action in the game is to punch and kick all opponents. In addition, you can be thrown with knives, and there will be nothing to fight back, only with feet.
‹
›
Home
View web version