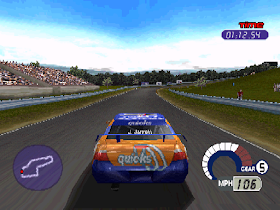 Genre: Racing / driving, Simulation
Perspective: 1st-person, 3rd-person
Vehicular: Automobile, Track racing, Vehicle simulator
Published by: Codemasters Software Company Limited
Developed by: Codemasters Software Company Limited
Released: 2000
Platform: PlayStation (PSX, PS1)
The third part of the famous racing series from the great game developer - Codemasters. This time, the developers took into account the wishes of the majority of gamers and made the game more accessible, if not more arcade-like. The two previous parts were distinguished by a strong imitation of real races, where your car, at the slightest piloting error, ended up on the side of the road or in a skid. This was very unpleasant, but given the possibilities, it greatly increased interest in them. Now the game has both, namely, both experienced and beginners will feel comfortable in the game. The game has significantly improved graphics (it was even nothing before, almost the maximum resolution for PSOne), a lot of reviews of races, modes, tracks and cars. The interface of the game resembles the design of another racing game from Codemasters - the game Colin McRae Rally, a hit of all times and peoples. Recommended!
‹
›
Home
View web version