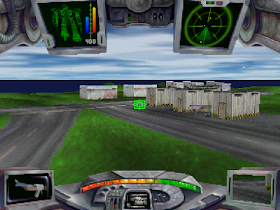 Genre: Action, Simulation
Perspective: 1st-person
Vehicular: Mecha / giant robot
Setting: Post-apocalyptic, Sci-fi / futuristic
Published by: Telegames
Developed by: Eclipse Software Design
Released: 2000
Platform: PlayStation (PSX, PS1)
Iron Soldier 3 takes place in a war-torn, high-tech world. Influential corporations began to capture and enslave entire countries, establishing their own dictatorship in them. You are invited to become the pilot of a giant combat robot and prevent the capture of the United Republic - one of the last independent territories. After choosing the robot model you like and installing the appropriate weapons on its body, you go out to crush the invaders in huge locations filled with skyscrapers, towers, electric towers and other buildings, each of which can be blown to shreds. It's just a sin not to fight in such locations with a friend, sending generous portions of missiles towards him and occasionally shooting down annoying helicopters in two-player mode!
‹
›
Home
View web version