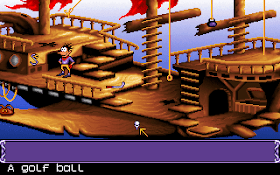 Genre: Puzzle
Perspective: 3rd-person
Visual: Fixed / flip-screen
Interface: Point and select
Setting: Fantasy
Published by: Sierra On-Line
Developed by: Coktel Vision
Released: 1994
Platform: DOS
Goblins, one i and one character. Or is it two? Let's figure it out together. Blount, during his trip in an airship, unexpectedly falls under ... a rockfall. Throwing the ship to perish and going downstairs, he realizes that he was right in the orc camp! Death was inevitable, but ... short-lived. But now there are two of them in one body. Or one in two? If you play, you will find out. 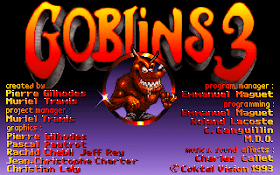 In addition, the game has many helpers, from dragons to fleas. Often times you will have to play with them and try to solve the puzzle from the other side. Also, there was a "freehand" mode, when you see the table and all the objects on it and can manipulate them.
The game as a whole has become more varied, but not colorful. Some locations are underdeveloped, others are replete with small items. The music is a little weaker than in the second part - it's just not enough. The game has taken a sharp step towards abstraction, which is not good. Glitches have been added, now the game is unstable in some places. Save more often and for different slots.
And now for the good. The graphics have not changed - all the same cartoonish and beautiful. The plot is not worse than in 1 or 2 parts. The duration of the game has increased by one and a half times. The interface has become even more user-friendly - now the inventory is shown in a separate window.
‹
›
Home
View web version