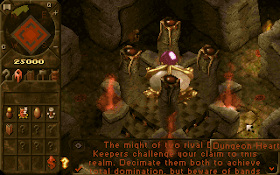 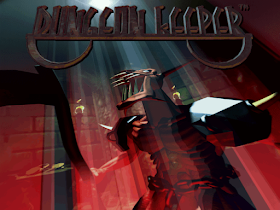 The game combines strategy and 3D-Action from the first person, and it does it great. You take on the role of the Lord of the Dungeons, a kind of personification of the evil of the underworld. Your strength lies in a stone called "Heart of the Dungeon", and this stone is sought to destroy the good heroes who your existence does not allow you to sleep. With them and with other Masters, you will have to fight by various methods.
By arranging the dungeon, you attract various types of monsters. This is your main strength. You can control monsters directly only if you possess one of them (that's the use of the 3D-Action genre) with a special spell. In other cases, you only have to "advise" the monsters to act in a certain way, by throwing them into a certain room. For example, if you throw the Sorcerer into the Library, he will start looking for new spells for you, and if you put him in the Training Hall, he will begin to improve his fighting skills. Each monster needs rest and food, each of them is subject to outbursts of panic or unbridled rage, each of them is able to develop by raising levels. And if the conditions of your dungeon do not suit him, he will simply leave. So keeping and nurturing monsters is one of your main tasks.
In order not to put them at risk once again, there are traps. They are created in the Workshop and are designed to make your life easier. After all, what could be better than seeing a whole squad of adventurers smeared on the walls of your dungeon with a huge cobblestone? Or, if you have a Prison and a Torture Room, you can starve the good heroes to begin with, and then try to find out various secrets from them in the torture room, or lure them over to your side. The developers gave their imagination plenty of free play, so for different types of heroes the torture will be different, but always very sophisticated.
If you like the idea of ​​being "evil," you must give this game a try. From her you will get just a lot of fun and pleasure.
‹
›
Home
View web version