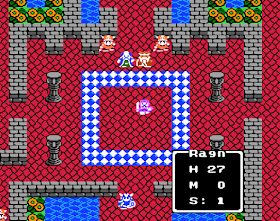 Genre: Role-Playing (RPG)
Perspective: Top-down
Pacing: Turn-based
Gameplay: Japanese-style RPG (JRPG)
Setting: Fantasy
Published by: Enix America Corporation
Developed by: Chunsoft Co.
Released: 1992
Platform: Nintendo (NES)
The final part of Dragon Warrior IV, starts a new historical trilogy tenkuu (paradise), the plot of which revolves around the Zenithia castle. Divided into chapters, the game offers to go through 4 of them in order to tell the story of 4 characters who led different lifestyles before reuniting with the main character. The fifth chapter allows the player to take control of the main character, while collecting a group of other characters.
As in similar RPGs, the characters will visit many cities and dungeons in order to explore them to find various objects, use a boat to move across the oceans. The battles take place in turn-based mode, although the backgrounds are simply absent, placing 4 figures of characters on a black background. And, of course, the most interesting opportunity to make quick money is presented in the form of a casino where players can play blackjack, poker, slot machines or even place bets on monster duels.
‹
›
Home
View web version