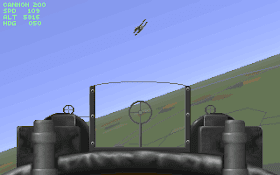 Genre: Simulation
Perspective: 1st-person, 3rd-person
Vehicular: Flight / aviation, Vehicular combat
Setting: Historical events, World War I, World War II
Published by: MicroProse Software
Developed by: Vektor Grafix Ltd
Released: 1993
Platform: DOS
Simple and unassuming flight sim with nice graphics for its time. At its core, it is an attempt to collect all the major milestones in the history of aerial combat in one game. By the way, very successful.
We are offered a choice of trying "in action" both combat winged vehicles of the First World War, and quite modern (at the time of the release of the game) fighters, including the main machines of all "milestone" in the development of aviation of armed conflicts. How does it all fit into one game, you ask? Everything is very simple: the developers did not load the game with all sorts of stories and campaigns. Although, of course, the opportunity to participate in the battles of past wars is left to us, however, in the form of one (but detailed) mission for each side of the conflict in each of the eras. And there are a lot of the latter in the game. We are given a choice: Vietnam, Korea, the Lebanese-Israeli conflict, the Falklands and, of course, both world wars. One aircraft from each side of each war. Rate: British Camel, Mess. BF-109, MiG-15, F-16, Fokker, F-4 Phantom and many more! The main highlight is the Harrier, with perfectly realized vertical takeoff and landing! And this is not the whole list ... 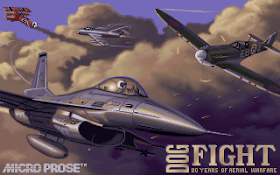 The controls in the game are very friendly and at the same time not arcade. Here you have flaps, brakes, afterburner, and a difficult (but not mandatory) landing technology. All this is perfectly complemented by the "duel" and "what if" modes. The latter will give you the opportunity to choose what, where and with whom to fly. How do you like the fight between Mirage and the 5th Spitfire in France?
The game can be recommended to almost everyone: moderately simple controls, graphics that do not hurt the eyes (in fact, the F / A-18 Hornet is not that far from it ...), and complete freedom of action. The result is that the game can be quite relaxing at the end of a hard day.
‹
›
Home
View web version