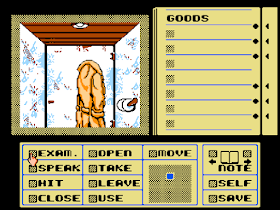 Genre: Adventure
Perspective: 1st-person
Gameplay: Puzzle elements
Setting: North America
Narrative: Detective / mystery
Published by: Kemco/Seika
Developed by: ICOM Simulations
Released: 1990
Platform: Nintendo (NES)
The game takes place in Chicago in December 1941, shortly after the attack on Pearl Harbor. The protagonist of the game is Theodore "Ace" Harding, a former boxer turned private detective.
One morning the player wakes up in the shower stall and cannot remember who he is. The shower stall is in Joe's bar. A dead person is found in the office upstairs, and Theodore can be charged with a murder he did not commit. There is some clue as to who the murdered person was and who the player is. A chair with straps, mysterious test tubes and a syringe, and a puncture mark on his arm found by the player indicate that sophisticated torture was used on the character.
Theodore's memory and mental state deteriorate, so the player must find an antidote to drugs that caused memory loss. After that, Theodore has flashbacks to help the player evaluate evidence and make decisions.
The concept of "Deja Vu" is simple but effective to immerse you in the game with your head, revealing all the twists and turns of the plot step by step. The gameplay is simple: controlling the hand icon, you need to click on various commands and objects in the scene to interact with the environment.
The world of "Deja Vu" is a full detective story. We will have to carefully wander the city streets and buildings, collecting evidence and files. Due to the loss of memory, the hero is tormented by excruciating terrible headaches, which are getting stronger every time. During the quests, we get a lot of memories from psychedelic disorders, which gradually reveal the storyline. The game will have to closely monitor not only the police who want to hide the hero behind bars, but also the criminals who do not want to go to the cell. Drunkards, robbers and prostitutes are the main contingent for communication in the game, it is from them that we have to get the necessary information. The way in which the plot is revealed and presented is simply mesmerizing: from the unpleasant awakening in the bathroom to the expansion to the global level.
The whole success of "Deja Vu" lies in the excellent combination of style, atmosphere and storyline. Walking in the game now and then evokes eerie feelings, so most of the time you will have to worry and fear for the hero's life (and in the course of the game many unpleasant surprises will be presented). There are many dangerous places where we can be killed. No need to rush to what you are doing, think over all the puzzles and chain of events. The game does not stand still. For example, if a burglar pointed a gun, think carefully and quickly what to do, but once the move is made, you will have to face the consequences of your decision, both good and bad.
The true strength of the game lies in its visual and audio effects. The graphic style is presented very nicely and interestingly. The game has a certain gloom, colorlessness. This style of painting adds a lot of eerie elements to the overall atmosphere. Drunkards, robbers and girls of easy virtue express despair: you can clearly feel the feelings and pain of the protagonist and his suffering from amnesia. The whole game has a rough adult atmosphere, showing the harsh laws of the street in their true form.
But what's really catchy is the music. The compositions that accompany us around the world of this game clearly emphasize the atmosphere of each location with its eerie elements, sometimes appealing to some kind of nervous feelings. The theme for each scene is excellent. Being indoors in a safe area, soft emotional tones play, making it possible to breathe out all the accumulated experiences. But as soon as we go out into the street, the tempo of the music increases, and the melody becomes more and more disturbing and disturbing, each time reminding us that danger can lurk around every corner. When we go down into the damp sewers, you can directly feel the dirt and cold in the music. When you find yourself in danger, every now and then you want to plug your ears from the nightmarish melody that causes the terror of hearing.
This is not the first version of "Deja Vu", but it is by far the most famous and probably the most appreciated of all the others. When ported to the NES console, a lot of nice extra touches were added: a stunning atmospheric soundtrack, impressive graphic style, and more. A game that was just good, lacking a lot of detail and sharpness, suddenly turned into a work of art.
"Deja Vu" for the NES isn't ultra-revolutionary, it's just a beautifully designed detective novel that has a good story, great music, nice graphics, and no annoying bugs. Some people may not like the old style of graphics and the high risk of death in 8-bit console products, but for those with patience and concentration, "Deja Vu" is a good "recipe" for an amazing journey through the dark swamps of human sins.
‹
›
Home
View web version