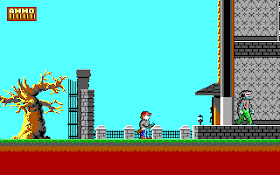 Genre: Action
Perspective: Side view
Visual: 2D scrolling
Gameplay: Platform
Published by: Softdisk Publishing
Developed by: Gamer's Edge, id Software
Released: 1991
Platform: DOS
Since the first part, Dave has matured significantly, instead of a pistol he got himself a shotgun, and this time he went to put things in order in the mansion inhabited by all kinds of evil spirits. 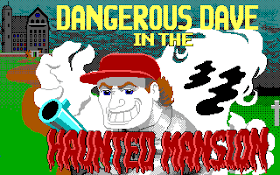 Compared to the first part, the graphics have undergone dramatic changes, however, as well as the gameplay. Now there is no need to collect prize cups to open the door to the next level. You don't have to look for weapons at every level again, Dave always has it with him, and you can shoot them not only in a straight line, but also upward, aiming at opponents, for example, on the ceiling or on the floor above. But now there was a need to reload the shotgun by firing eight shots. The cartridges are endless, but the need to reload can become fatal when fighting bosses, if you do not calculate your tactics in advance.
Dave's death scenes are made in the form of short animated clips, demonstrate all the variety of black humor of the developers, and vary from monster to monster. Only their bloodiness remains unchanged.