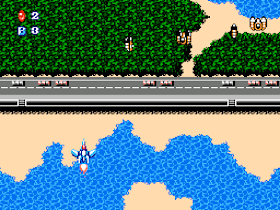 Genre: Action
Perspective: Top-down
Art: Anime / manga
Gameplay: Arcade, Shooter
Published by: Konami Co.
Developed by: Konami Co.
Released: 1991
Platform: Nintendo (NES)
According to the plot of the game, in 199X, robots attack Tokyo and begin to destroy the city. The heroes of the game, a boy and a girl piloting blue and pink space fighters, enter the battle.
The game consists of seven levels, at the end of each of which the player fights a boss. The game has a simultaneous game mode for two players. The player's ship has three different configurations that can be changed during the game. Since this was the last Konami shumps game for the Famicom, the product was designed to load the console's hardware to 100%, plus the cartridge used a special Konami VRC4 chip (previously used in the Gradius cartridge) II "), which helped the console and accelerated graphics in places where scrolling in four directions was used, as well as during meetings with large bosses. However, due to the late release of the game, already during the downturn in the interest of players in the Famicom, a year after the start of production of the successor in the person of SNES, "Crisis Force" did not achieve the popularity that Konami hoped for.
The main feature of the game is the ability of players to change the shape of their ship, and accordingly, its weapons will also change. The hero ship "Aurawing" has three main forms:
- "Front Offense Type". Used to shoot enemies directly in front of you.
- "Side Offense Type". It is aimed at destroying enemies on the left and right sides of you (shooting goes simultaneously to the right and left).
- "Rear Offense Type". Shooting is directed backward.
Each mode has a "normal" firing bonus (blue balls) and a "special" firing bonus (red balls), which can be obtained from knocked out enemies or by destroying food containers. The "normal" and "special" bonuses change the firing style in each three modes, and they can be pumped up to three levels.
There are also "combined forms" that can accumulate, and this allows our ship to transform into a completely new form in combination with another player's ship depending on how many players are involved in the passage. When allied units are assembled, our ship (along with ships of other players) changes its appearance to a combined form for a certain period of time. The one who scored the most of these parts. will control the main weapon of the combined ship, while the other player will only control the secondary weapon. When the timer expires, our ship returns to its normal state (along with the ships of other players).
The music for the game was composed by Ken-ichi Matsubara, a former member of the Konami Kukeiha Club who previously worked on Castlevania II: Simon's Quest and Lightning Fighters. The soundtrack for the game "Crisis Force" was released on September 22, 2011 as part of the "Konami Shooting Collection CD" box set.
The game turned out to be excellent! She, of course, ended up being deprived of the attention of many players, since it was released already at the sunset of 8-bit consoles. But the game didn't get any worse from this. The graphics here are simply phenomenal: scrolling moving backgrounds, a bunch of enemies, a lot of special effects, explosions, lights, sparkles. You just need to see it all once, you will definitely be amazed by the maximum capabilities of the 8-bit NES (of course, do not forget that an additional chip was soldered into the game cartridge to accelerate graphics, later this idea was used when creating, for example, "Virtua Racing" for Sega Genesis / MegaDrive). The sound is also gorgeous, the sound effects are exactly what it should be for this whirlwind shooter. And, of course, just phenomenal gameplay, especially when playing "multi-player": for this component, "Crisis Force" is one of the best games for the NES console in general.
‹
›
Home
View web version