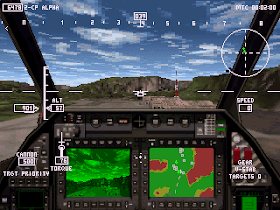 Genre: Action, Simulation
Perspective: 1st-person, 3rd-person
Vehicular: Helicopter, Vehicular combat
Published by: NovaLogic
Developed by: NovaLogic
Released: 1997
Platform: DOS
The second half of the 1990s was the golden era of flight simulators for all tastes. Fans of rotorcraft with any need had any suggestions. But the highest place in the pantheon of those years was deservedly occupied by the most advanced helicopter simulator Jane's Apache Longbow. When the potential winner in the category "best helicopter simulator" came out, no one doubted his leadership, but suddenly - suddenly - a strong competitor appeared on the store shelves - the third part of the Comanche arcade simulator series, with a strong bias towards the realistic side, from the legendary game manufacturer with voxel graphics from Novalogic.
Comanche 3 immortalized in the program code the pride of the US military industry of those years, the joint development of Sikorsky and Boeing - the RAH-66 helicopter. Unfortunately for the US Army, the development of the helicopter (only 2 flying prototypes were built) collapsed, costing over $ 3 billion in taxpayers. An ultra-modern reconnaissance and combat helicopter made using stealth technology, designed to be the main antidote against thousands of Soviet tanks covered with numerous air defense systems, after the fall of the Iron Curtain, the collapse of the USSR and the disappearance of the threat of the Third World War, it was simply not needed; Congress did not allocate money, since the standard Apache is more than enough for the secondary task of attack helicopters to destroy bandit formations and poor armies of the Third World countries.
Comanche 3 is the first game made on the Voxel Space 2 engine. The same engine on which the first and second parts of Delta Force were released. For those years, it was a huge breakthrough in graphic design. Various landscapes - from Siberia to Ukraine, from Iraq to Cuba - looked amazing. Even at close range to objects, the graphics quality was at the level of 3D shooters of those years! You could see how the hatches of your helicopter's weapons are opening, a transparent cockpit canopy, explosions, special effects. Soundtrack (including voice messages digitized from the real Comanche) - 16-bit, with Dolby Surround - was also available. It is not surprising that at that time the game required a sufficiently powerful gaming system (for a comfortable flight on ultras, a Pentium-166 with 64 MB of memory and an AWE32 card was required) - comparable to the price of a family car.
The physics simulation of flight has also undergone a qualitative improvement over previous versions. It was created with the participation of consultants - pilots of real combat vehicles. The improved algorithms faithfully convey the controllability of the helicopter of the future - in terms of flight, Comanche 3, if it did not overtake Jane's Longbow, then certainly got up one step with it. As for the avionics, in this regard, the Comanche is much simpler than its older brother. Either this is done due to arcade simplification, or the avionics itself is simpler. "Comanche" is classified, and this aspect of history is silent. But control of sensors, navigation and weapons in Comanche 3 is much easier than in Apache from Jane's - that's a fact.
As for the missions, in addition to training, the game has 4 campaigns with 8 missions each (Ukraine, Siberia, Iraq and Cuba). Strange, but missions, as a rule, boil down to takeoff, flight along a route with a partner and the destruction of armored vehicles, buildings, or air combat against enemy helicopters, but I have not seen reconnaissance missions without shooting. Apparently, intelligence is too boring, the developers thought. To choose from, like the real Comanche, you have 4 types of weapons: AGM-114 Hellfire anti-tank missiles, Hydra 70 unguided missiles, FIM-92 Stinger air-to-air missiles, as well as a 3-barreled 20 mm Gatling cannon installed on a movable turret. An interesting feature of the Comanche series of games - the ability to give target designation not only to your wingman, but also to artillery, which covers the indicated square seconds after confirmation - has not disappeared either.
Multiplayer was standard for those years - a joint game over a modem and a local network. Unfortunately, you cannot fly together on the same helicopter (one pilot, the other is a shooter) - so the game would give an excellent interaction experience.
Comanche 3, thanks to its excellent graphics, improved physics and relative accessibility, was undoubtedly one of the brightest and juiciest games of 1997. Thanks to this, the expanded Gold edition with new missions and cosmetic improvements was not long in coming.
‹
›
Home
View web version