Boy and His Blob - Trouble on Blobolonia (NES) 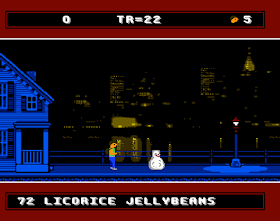 Genre: Action
Perspective: Side view
Visual: Fixed / flip-screen
Gameplay: Platform, Puzzle elements
Published by: Absolute Entertainment
Developed by: Imagineering Inc.
Released: 1990
Platform: Nintendo (NES)
In this unique game we have to take control of a boy who must help Blob to get to his home planet. This is no ordinary platformer, as the boy cannot jump and attack enemies. Instead, the Blob can be filled with different types of peas, which transforms it into a variety of objects. It can be used as a ladder, bridge or trampoline; turn into an umbrella to slow down the fall of the boy or protect him from falling objects; into a bubble so that the boy can swim and breathe underwater; into a soldering iron to burn through certain obstacles; or maybe even turn into a bird and watch the boy everywhere. There are a total of 12 different forms that Blob can take, all of which can be used to explore the game world.
Summing up, we can say that the main plus and the most worked-out part in Boy and His Blob: Trouble on Blobolonia "is the gameplay. It is unique, not like anything else released earlier or later. If I could tighten the graphics and sound a little more to the level gameplay, then the game would definitely become a hit on the console.
‹
›
Home
View web version