Beneath a Steel Sky (DOS) 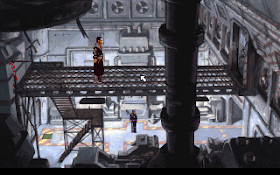 Genre: Adventure
Perspective: 3rd-person
Gameplay: Graphic adventure, Puzzle elements
Interface: Point and select
Setting: Cyberpunk / dark sci-fi, Oceania
Published by: Virgin Interactive Entertainment
Developed by: Revolution Software Ltd.
Released: 1994
Platform: DOS
In a word: the first quest of Charles Cecil (father of Broken Sword), one of the best and certainly one of the most original adventures of the turbulent 90s.
Controlling the eccentric paranoid Robert Foster, dressed in a suit with a high collar, the player will have to find out the secrets of the dystopian world and the secrets of the hero's father. Classic "Lucasart" quest of the 1990s, made on the Virtual Theater system, with standard cursor-inventory control. But it is not important. 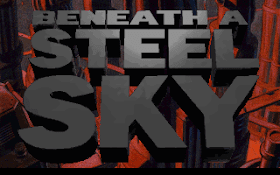 The important thing is that each classic "Lucasart" quest is a masterpiece, unlike any other classic "Lucasart" quest. Specifically here, the player will find himself in the stunning atmosphere of the near future, when corporations will still rule the world. Decline and devastation is present here in almost every scene: trash lying behind trash cans, modern-modern art ("simplified and conceptual trash", in the words of Joey the robot), dirt and oppressive, all-consuming feeling of self-destruction of civilization and the degeneration of mankind. From this one could easily concoct a psychological thriller in the spirit of George Orwell, but Charles Cecil and his associates chose another, more accurate version - a magnificent "black" cyberpunk comedy.
So, the ruling corporations here are represented by the head of a pipe factory named Lamb, dressed in a fur coat from the last ten beavers on Earth. The atmosphere in the local bar is reminiscent of a scene from Blur - The Universal's video about a "polished" future ... exactly the opposite. In the basement of the church, an army of clones is being prepared, and the main hero quarrels with his robot even when a plasma cannon is aimed at both of them.
This robot is one of the most colorful characters in the entire history of quest building. His name is Joey, and he is completely dependent on his motherboard (which Foster repeatedly uses, using the board for the most nefarious purposes). It is not known who and when taught the robot sarcasm, but even the legendary Alf can envy its reserves: get ready for caustic jokes and stupid remarks at the most crucial moments. In spite of everything, Joey is sometimes very naive or just pretends to be so. In a word, he will make you smile more than once or twice.
Another original idea of ​​BASS is the entrance to virtual reality, thoroughly conceptual, where the main hero has to break through all the riddles and glitches to ... However, you yourself will find out. The main thing is that the gameplay in this environment is completely different and the commands you give are completely different.
And finally - let's summarize: the game is exciting, funny and moderately difficult. One of those quests that everyone should try.
‹
›
Home
View web version