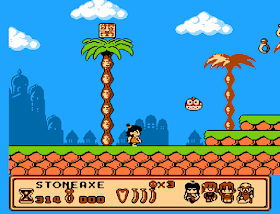 Genre: Action
Perspective: Side view
Visual: 2D scrolling
Gameplay: Platform
Setting: Fantasy
Published by: TAKARA Co.
Developed by: KID Corp.
Released: 1991
Platform: Nintendo (NES)
"Banana Prince" ("Bananan Ouji no Daibouken" for the Japanese market) is an incredibly fun and quality platformer for the NES.
The background of the game is as follows. In the Banana Kingdom, the banana people have a holy relic - the Giant Banana. Once a dragon flew past the relic and, with a grunt, stole it! "Do not worry! - said the Banana Prince to his fellow countrymen - I will find our great idol. " This is where the story of the Banana Prince begins.
A strange and funny story, the same gameplay. Our prince knows how to grow banana bushes from literally nothing, which is very useful when trying to get to high points on the level. To fight enemies, the prince has a large arsenal: from knives to axes. Scattered throughout the level are rings that you need to collect and then you can buy weapons, bonuses and even play in the casino. Yes, yes, as a mini-game there is even a casino, which is not quite full-fledged (with cigars, martinis and girls), but it is quite possible to test yourself and try to win, for example, at dice.
The graphics in the game are very bright, the animation is at a high level, the drawing of the backgrounds is excellent. What are the clouds pulsating to the beat of the music? The sound in the game is also up to par. By far, "Banana Prince" is one of the best platformers for the NES console.
‹
›
Home
View web version