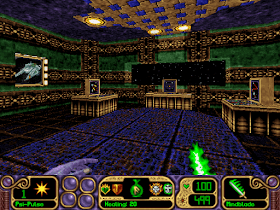 Genre: Action, Simulation, Strategy / tactics
Perspective: 1st-person, Top-down
Gameplay: Shooter
Vehicular: Space flight
Setting: Sci-fi / futuristic
Published by: Psygnosis Limited
Developed by: TAG
Released: 1997
Platform: DOS
The game is based on such a plot. There is a certain galaxy - well, it is said loudly: only under a hundred stars. And here in this "galaxy" there was, to put it mildly, a serious disaster. A super-ship of an unknown race appeared, which everyone calls the Black Creatures. Who they are, where they come from, of course, is unknown. Their ship is shaped like a dried Alien carcass from the horror movie of the same name - a tail, a skeleton and a skull. A weapon of destructive power is hidden in the head (skull) of the ship. With the help of a mysterious ray, it is capable of burning any planetary system with a star together. Why the Black Creatures are doing this - no one knows, however, the number of stars in the "galaxy" is getting smaller and smaller. Of course, someone must put a decisive end to this. 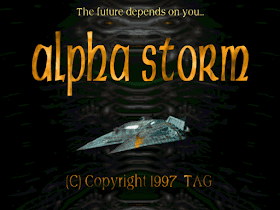