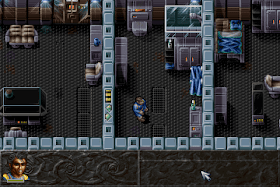 Genre: Role-Playing (RPG)
Perspective: 1st-person, Bird's-eye view
Pacing: Turn-based
Setting: Fantasy, Sci-fi / futuristic
Published by: Blue Byte Software
Developed by: Blue Byte Software GmbH
Released: 1995
Platform: DOS
In 2227, the Toronto spacecraft reaches a distant star system. The ship's owners, mega-corporation DDT, believe that the third planet of the orbital system contains the richest deposits of minerals, and are determined to start mining them as soon as possible, thus outstripping competitors. The computer has identified the planet as deserted, and a pilot named Tom Driscoll is sent out on a reconnaissance mission just to find out if the planet's atmosphere is human-friendly. But during the flight of his shuttle, a malfunction occurs, and Tom, along with an anthropologist professor (government inspector), are forced to make an emergency landing on the surface of the planet. They discover that it has the richest flora and fauna, as well as a sane indigenous population. Tom and his companion set off in search of the Toronto that has landed by this time, towards adventures they could not even dream of.
The indigenous population of the planet is represented by feline humanoids with magical abilities and, oddly enough, people. The secret of their presence on this planet for many hundreds of years is also yet to be revealed by Tom.
Be prepared for a lot of reading. A book-worthy plot is revealed in dialogues that can be quite lengthy. Also, you can use a small dictionary in which you will write down the terms used by the aborigines. The plot, in general, is quite linear, but, despite this, the player is given enough freedom to explore the world and get to know its inhabitants, their habits and customs, their culture alien to humans.
You will not be allowed to generate a character - a rigid connection to the plot obliges you to be exactly Tom, the pilot of the shuttle, and endows you with the appropriate abilities. The composition of the team (up to five characters, not counting Tom) also entirely depends on the plot situations. You can get rid of unwanted companions, but it is highly discouraged to do so - some items of equipment can only be used by representatives of a certain race or class, and an extra pair of hands (paws) will not interfere at all in battles with numerous opponents inhabiting the Albion world.
Physical indicators (strength, agility, intelligence, speed, endurance and luck) practically do not change during the game. But the different skills of the characters grow as they are used or as the level rises. Although, again, no one will give you the choice of which skill to raise to one of the characters. With the accumulation of a sufficient number of experience points (exp), the character's indicators will simply increase by a certain amount. The exception is training points, which are obtained with each level up, which can be used to increase a certain characteristic of the trainer.
Albion takes a very non-standard approach to displaying the game world and the events that take place in it. When exploring the interior of buildings, where communication with NPCs and attention to detail is especially important, the camera hovers over the heads of the characters. Also, this type is used when traveling on the world map. But various labyrinths or cities will have to be passed from a first-person perspective, like the games in the Might & Magic series.
The battles in the game are phased. You give your fighters certain orders on the field, lined with squares, and then monitor their implementation in real time. The inventory becomes available only in the intervals between the phases of the battle, and you should use this moment to heal the characters or to change their equipment.
Some of the characters in the game can use magic, which is divided into four classes. As it should be, spells that are not too strong in the early stages are replaced by more and more deadly ones as you progress through the storyline.
Keep in mind that the characters need to eat and sleep occasionally. And if you plan to explore dark caves, then it will not hurt to stock up on torches.
You quickly get used to the controls and interface, and a good plot, nice graphics and interesting gameplay make this RPG a good entertainment for any fan of this genre who will not refuse to spend time reading long dialogues or planning tactical battles. 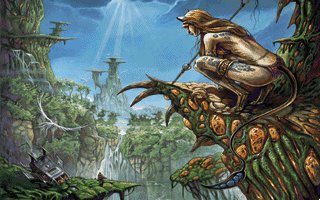