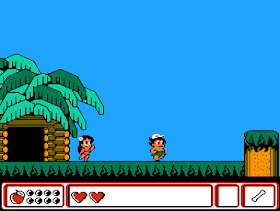 Genre: Action
Perspective: Side view
Visual: 2D scrolling
Gameplay: Platform, Puzzle elements
Published by: Hudson Soft Company
Developed by: Hudson Soft Company
Released: 1994
Platform: Nintendo (NES)
The fourth part of the adventures of Takahashi (Higgins), released only in Japan, unexpectedly appears before us not in the form of an adventure game (like the three previous parts), but in the form of an adventure game. Now you can slowly explore the vast island, earn prizes in various mini-games, and change weapons in your inventory. As in the Metroid, you need to get a certain ability to enter the next location. You can also pump the hero's health - now he does not die from the first hit. And with all the items in your inventory, rescuing the newly kidnapped girlfriend will be much easier. The sudden evolution of the series has given us all a truly interesting game.
‹
›
Home
View web version