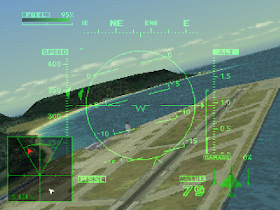 Genre: Action
Perspective: 1st-person, Behind view
Gameplay: Shooter
Vehicular: Flight / aviation, Vehicular combat
Published by: Namco Hometek Inc.
Developed by: Namco Limited
Released: 1997
Platform: PlayStation (PSX, PS1)
In May 1997, a number of prominent heads of state on the USEA continent came on a diplomatic mission with a target rumored to have been the fall of the asteroid Ulysses 1994XF04 a year later. During this period, a high-ranking military corps, codenamed "NA-P2700," orchestrated a coup d'état, rapidly establishing dominance across the continent. Their rapid advance helped to capture several areas of special importance in each sector and a weapon of mass destruction known as the "Extra Powerful Cruise Missile". As a last resort, the government known as Unified Command is calling on the 92nd Special Tactical Fighter Squadron, Scarface, a group of mercenary fighter pilots led by ace Scarface One, to fight the rebels. With hardware and logistics support. The Scarface unit intends to fight the Usean Rebel Forces and free her.
The gameplay of Ace Combat 2 is very similar to its predecessor, Air Combat. The player also completes missions, earns money for destroying equipment and gets the opportunity to purchase aircraft for them. The main difference from Air Combat is significantly improved graphics of the surrounding world and aircraft; for example, airplanes now have animations for flaps, air brakes, and afterburner. The game also has an Extra mode - which allows you to complete missions in free mode. Also available after 04 A / B are two wingmen John "Slash" Harvard and Kei "Edge" Nagase.
Ace Combat 2 is the first game in the series to feature Ace pilots. Throughout the game, players will be able to fight a number of designated pilots who have higher skills than regular enemies. The destruction of such an aircraft, after the mission, gives a medal, as well as a new skin.
This game was enthusiastically received by fans of air battles in the first version, and the second, noticeably improved version will, of course, be an excellent acquisition for fans of this genre.
The aircraft, cockpit, display and environment look very impressive and beautiful. The feeling of flight has become more powerful and more realistic. You can now soar above the clouds and attack from above like a falcon.
Management has become very efficient and simple enough. Both the expert will satisfy and the beginner will give the opportunity to quickly become a more experienced pilot. The game provides two options for displaying events - from the cockpit view and behind view. The cockpit display is very natural and gives an overview as if from the pilot's seat. Before you devices, triggers and the whole panorama of the battle. It is convenient to prepare attacks and fire.
‹
›
Home
View web version