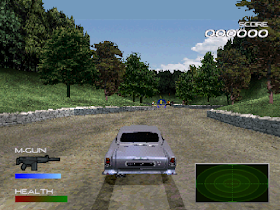 Genre: Action, Racing / driving
Perspective: Behind view
Gameplay: Shooter
Interface: Direct control
Narrative: Spy / espionage
Published by: Electronic Arts
Developed by: Electronic Arts Canada, Eutechnyx Limited
Released: 2000
Platform: PlayStation (PSX, PS1)
Having obtained a license to use agent 007 and what is associated with it, Electronic Arts did not think for a long time about what kind of project it would soon manage to expel from its womb. Most likely, the gaming giant looked closely at Tommorow Never Dies and, having pondered the multi-genre in it, came to the conclusion that, say, Bond trips on cars stuffed with all kinds of spy crap are very cool and very profitable from a commercial point of view. Then it's a matter of technology. As a result, the developer of С3 Racing and Test Drive Le Mans, the Eutechnyx team is ready to release game under the eloquent name 007 Racing by November.
In 007 Racing, we will be offered to ride a solid number of sophisticated little cars from a variety of Bond films, while simultaneously performing various tasks, including, as usual, destroying everything that is possible using a variety of annihilation means, which are stuffed with vehicles entrusted to the secret agent. That is, 007 Racing will be, in general, not just a race, but an action-packed shooter race, the basis of which will be a variety of missions that even provide for "strategic planning". In theory, all of this is somewhat reminiscent of Twisted Metal and Vigilante 8, although in a slightly different key and not slipping into a banal all-consuming rip-off. Well, or, at least, I would very much like to believe in it and hope that the initial impressions are not really deceiving us yet.
Outwardly, 007 Racing does not offer anything supernatural to the player, although it looks decent enough, at the level of other races for the first PlayStation. It would be very nice if 007 Racing was also played decently. I must say that, oddly enough, this "game under license" has the prerequisites for this. So let's see what more or less well-proven Eutechnyx will show us this time.
‹
›
Home
View web version