The Legend of the Seven Paladins 3D (DOS) 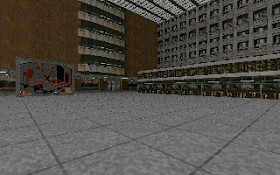 Genre: Action, FPS
Perspective: 1st-person
Gameplay: Shooter
Setting: Fantasy
Published by: SKC Soft Land
Developed by: Accend Inc.
Released: 1994
Platform: DOS
A modern inhabitant of no less modern China falls into the distant past, taking the place of one of the seven great Shaolin warriors (whom we will even be given to choose!) In the complex intricacies of political intrigues around the seizure of the throne of the Great Chinese Empire. Here.
The game is based on the earliest Build version - in fact, even TekWar, the first full-fledged commercial game on this engine, uses a later one; even the public beta of LameDuke uses a later one ... you get the idea. This gives it, on the one hand, the opportunity to be called the first game on Build, and on the other hand, to show us how far from the zero mark the same LameDuke has gone. 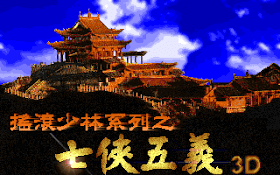 The graphics are quite expected from the engine, except that the opposition is not too well animated, and the ceilings are so low in places that they evoke sad associations with Wolfenstein 3D. The sound is adequate for the video sequence, the music is downright ethnic, which warms the soul very pleasantly, taking into account the ambient traditions of soundtracks of all other games on Build. The menu and in general all the text in the game is in Chinese, but in all awesome FPS text does not play a particularly important role.
The beginning of a new game was made in a remarkable way - the hero walks through the hall, on the walls of which there are portraits of Shaolin people, whose place he can take. Each of them has its own arsenal of weapons, so the choice is quite important. And after that we find ourselves in the "armory" room, which is actually a choice of difficulty in the game - a knife, a sword and a CHAINER are designed to symbolize, you know, Easy, Normal and Hard. Cool.
The game process itself is traditional through and through - at first we are supposed to have three types of weapons - a sword, something throwing and magic. For some time, you will have to get used to the fact that instead of numbers we are dealing with bars - one for life, the second for cartridges - as well as what the weapon icon on the dashboard means, since the real weapon is visible from the first faces only appear on promo screenshots of the game. Alas.
The fate of the game was difficult - the engine was licensed in a completely legal way, but not everyone paid the money, so when the game was completed, its release was canceled for very prosaic reasons. And the valiant Chinese pirates stole it and even then put it in the public domain. It got to the Western audience much later ...
‹
›
Home
View web version