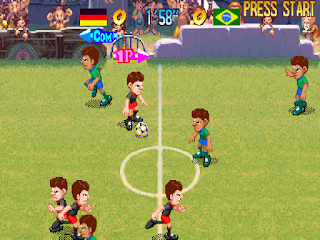 Genre: Sports
Perspective: Bird's-eye view, Side view
Visual: 2D scrolling
Sport: Baseball, Football (European) / Soccer, Tennis
Published by: Capcom Co.
Developed by: Capcom Co.
Released: 1997
Platform: Arcade Machine
Multi sports simulator in which you are offered 3 disciplines: tennis (Smash Stars), foccer (Kick Stars) and basketball (Dunk Stars). When playing tennis, you choose from 18 tennis players (only girls), each of them has strengths and weaknesses, as far as the gameplay is concerned, everything is just like in real life: serving, knocking the ball while standing and falling. Football - choose your team and go ahead, there are 8 of them in total, each in turn has a certain strategy: whether it is a game on counter attacks or on defense, it looks quite interesting. As for basketball, it seems to me that it turned out to be more complete, all the techniques used in a regular basketball were used: all kinds of dunks, throws from behind the 3-point zone and beyond, passes to the top and hidden, in general, everything, by the way, to choose from 8 national teams are also represented, the composition of which differs in the number of defenders, snipers, forwards and centers. There are 2 things in common between 3 games: your successful actions are accompanied by the general jubilation of the fans, and the difficulty, and it is at its best.
‹
›
Home
View web version