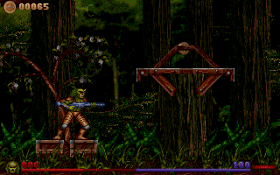 Genre: Action
Perspective: Side view
Visual: 2D scrolling
Gameplay: Arcade, Platform, Puzzle elements, Shooter
Setting: Sci-fi / futuristic
Published by: Softdisk Publishing
Developed by: Inner Circle Creations
Released: 1996
Platform: DOS
Excellent "side-scrolling" action, the complexity of the gameplay almost crossing the line between arcade and 2D-shooter, which some after its release even called "Doom in 2D". Agree that, if only for this reason, it already deserves attention.
Alien Rampage has one wonderful (for me, anyway) plot feature: there are no unnecessary, boring and uninteresting people here - only monsters. So, our hero is such a hefty green-skinned guy with a white comb on his forehead, of course - very cool and brave. His space fighter crashes on an unknown planet (on which everything looks by no means friendly), but at the last moment he managed to eject. This is good, only now our hero and his ship have landed at completely different points, and now we have to help the greenskin find his vessel, and for this - to move through the territory of the mysterious planet. 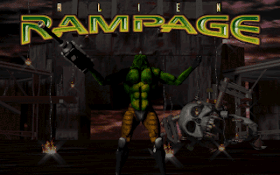