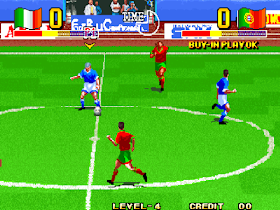 Genre: Sports
Perspective: Bird's-eye view
Visual: 2D scrolling
Sport: Football (European) / Soccer
Narrative: Comedy
Published by: SNK Corporation
Developed by: SNK Corporation
Released: 1996
Platform: Neo-Geo
This game is dedicated to such a popular sport as football. Here you have to fight as one of the countries for two cups: the world championship and SNK football championship. Passing the game will bring you a lot of pleasant impressions. Nice graphics combine bright colors. The atmosphere of the game is literally saturated with real football. Here it is not the ball that controls the player, but vice versa. This undoubtedly brings her closer to realism. The portrayal and dynamics of the viewers are done at a height. They literally deafen the player with their applause and shouts. At the same time, it is an incentive to strive to score a goal. Every sound of the game conveys the realism of real football. The player hit is like a shotgun shot. Among other things, the game is filled with animated inserts that were drawn by masters of their craft.
‹
›
Home
View web version