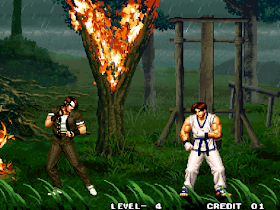 Genre: Action
Perspective: Side view
Visual: 2D scrolling
Gameplay: Arcade, Fighting
Art: Anime / manga
Narrative: Martial arts
Published by: SNK of America
Developed by: SNK Corporation
Released: 1995
Platform: Neo-Geo
The combat system has not undergone significant changes, mainly the existing mechanics have been improved. Now, after dodging a blow, you can retaliate against your opponent by pressing any of the attack buttons at that moment. A short jump appeared, which is performed by quickly pressing up. All returning characters have received new animations and moves, and the game speed has been slightly increased.
The main innovation was the ability to create your own team. The player can now freely choose any characters. However, you can only see the unique ending by playing as one of the standard teams.

1995 year. Once again, the world's strongest fighters were invited to the King of Fighters tournament.
The author of the invitation is none other than the mysterious "R"! Could this "R" be Rugal, who allegedly blew himself up on an aircraft carrier a year ago?
Participants in the new tournament include a new team of Billy, Yagami and Kisaragi, who sent Team USA to collect their belongings. But what is Billy's plan? What ambitions are driving Kisaragi? And what about Kyo Kusanagi's old enemy, Iori Yagami?

All teams and characters from the previous part returned to the game, with the exception of the USA team. She was replaced by the Rivals Team, which included Billy Kane from Fatal Fury, Eiji Kisaragi from Art of Fighting 2 and the new character Iori Yagami.
A sub-boss appeared in the game, who is the father of Kyo - Saisyu Kusanagi, who was presumed dead during the last King of Fighters tournament.
Rugal Bernstein is back as the final boss. He is possessed by the power of Orochi and in this game is named Omega Rugal.
Both bosses become available to the player after entering a special code on the character selection screen. Thus, the total number of characters in the game reaches 27.
The Game Boy version features an exclusive character - Nakoruru from the Samurai Shodown series .
These new fighters join all of last year's tournament participants, except for the American team, of course, both in the battle and in the all-consuming intrigue that are the foundation of the King of Fighters 95.
‹
›
Home
View web version