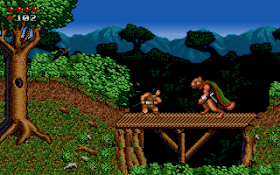 Genre: Action
Perspective: Side view
Gameplay: Platform
Setting: Fantasy
Published by: Beaucomm Interactive
Developed by: Apogee Software
Released: 1995
Platform: DOS
A beautiful and undeservedly overlooked arcade platform game with a level of performance that you rarely see.
In short, the plot is as follows: the world of Mystery is divided, everything is very bad and it gets even worse - the possessions of people were attacked by a cruel race of aliens (of course, from nowhere). And here our heroes appear very in time - brother and sister, Endrik (a typical warrior-barbarian) and Elandra (strong in magic). We have to save the world again! 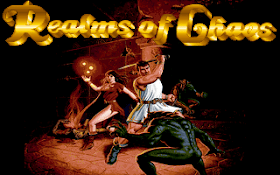 The game begins in the forest, we play Endrik; you can jump, swing a sword - at first glance, everything is as usual. But as soon as you press the "space", Elandra appears instead of him with thunder and lightning. It immediately becomes more interesting to play, and in the future it turns out that both heroes are equally useful and it is almost impossible to complete the game with one person.
And you will have to go through no less than 26 levels - forests, swamps, dungeons and all sorts of difficult to identify places, for example, thickets of huge mushrooms (yes). Enemies, unfortunately, do not shine with intelligence, but there are a lot of them and they look like a "top five" - the artists were not too lazy.
And since we're talking about graphics: the game looks just great, even now, especially considering its scanty system requirements (I personally launched and played without brakes on the 386SX / 40, although this is unlikely to say anything to the younger generation). I just want to say: "You knew how!". And indeed, they knew how. What are only reflections in the water. In addition, the sound and (especially) music are not far behind.
In general, we can say the following: an excellent platformer without claims to originality, but of the highest quality, which can be advised to everyone without exception. It remains only to regret that he somehow did not leave a special trace in history. However, this is the fate of many Apogee games ...
‹
›
Home
View web version