Lighthouse: The Dark Being (DOS) 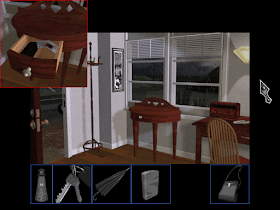 Genre: Adventure
Perspective: 1st-person
Gameplay: Puzzle elements
Setting: Steampunk
Published by: Sierra On-Line
Developed by: Sierra On-Line
Released: 1996
Platform: DOS
A writer who has written off, decides that a change of place for him will be the most beneficial means to restore creative potential. No sooner said than done, and he finds himself on the coast, in a rather picturesque place, where he meets a certain professor who recently bought himself an old lighthouse, standing not far from the house where the writer was staying. Naturally, the professor needs him for experiments ... which do not bring him to good. 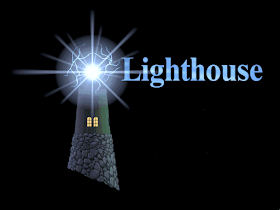 On a dark and stormy night, as they say in bad horror films, our hero - namely, in the shoes of the Writer, we have to take part in further events - notices a mysterious blue flash at the top of the lighthouse, and on the answering machine, a recording of a message from the Professor with a request for help is found ... he DONE something there, and therefore we have to save his young daughter.
Although the game begins as a bad, either a horror movie, or a detective, having found out that the Professor managed to break into another world, the player realizes that there will be a completely different level of epic character. It will be, do not hesitate. According to all the canons of the genre, we will be dragged through an insane number of various places, equipped with an equally insane amount of sophisticated mechanistic puzzles that we have to solve. Naturally, according to all the canons of the genre, the plot will stray so twisty that we have to solve an insanely lot of puzzles.
In principle, outwardly, the game fully complies with all the standard clichés in relation to Myst-like quests. First-person view, pre-rendered pictures, incomprehensible mechanisms ... everything is there. The inventory is pleasantly amused by the fact that a fixed place is allocated for it on the screen, and each item takes its own volume of this place. Otherwise, everything is standard. When we move the cursor to the edge of the screen, we get an arrow to go to another screen, and so on until the victorious.
Someone may be interested in the plot, someone - in puzzles; but if you are a squeamish lover of Myst games - this game will suit your taste. Everyone else goes to play at least Shivers, where there are no impenetrable puzzles (there are - moreover, the puzzle with the safe came out so tricky that Sierra was forced to post its SOLUTION on her website), or, say ... Myst itself or any of its sequels. As you wish, in general.
‹
›
Home
View web version