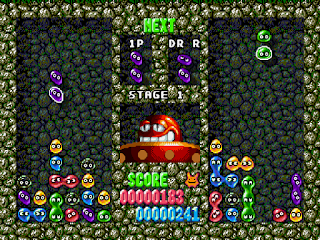 Genre: Puzzle
Art: Anime / manga
Pacing: Real-time
Gameplay: Falling block puzzle
Published by: SEGA of America
Developed by: Compile
Released: 1993
Platforms: SEGA Genesis / Mega Drive, SEGA Master System (MS)
Wonderful game descendant of Tetris. But there is almost nothing left of the initial Tetris. Puyo Puyo is an original game released in Japan in 1992. In which the famous Japanese characters Aruru Nadja were presented. To make this game popular in Europe, they decided to make a continuation of the popular game Sonic the Hedgehog from it. In the game we will meet characters from the Adventures of Sonic the Hedgehog cartoon. This is an ode from the games, in which we will not see the most important character of the Dream Interpretation. The plot of the game is quite familiar, Dr. Robotnik kidnaps the inhabitants of the city of Beanville on the planet Mobius. Since he wants there to be no more music, no more fun. He puts them in the Mean Bean-Steaming Machine, it will turn them into slaves of robots. You have to fight with the guards Dr. Robotnik, and at the end meet him. In total, there are 13 opponents in the game who will have to be defeated. In the game, you need to make up next, something like drops (beans). From four identical droplets next to each other. To fill up the enemy Refugee Beans, they are also Garbage and Ojyama, you need to create a chain of reactions.
‹
›
Home
View web version