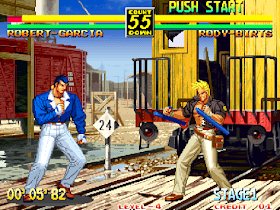 Genre: Action
Perspective: Side view
Visual: 2D scrolling
Gameplay: Arcade, Fighting
Art: Anime / manga
Narrative: Martial arts
Published by: SNK Corporation of America
Developed by: SNK Corporation
Released: 1996
Platform: Neo-Geo
The third game in the series. There are fewer playable characters, the sprites are finally noticeably prettier, the animation has become much smoother, this also applies to backgrounds. The difficulty of the game has increased, opponents usually fight with only super blows. Despite its beauty and dynamism, the game does not cause a desire to return to itself after one or two playthroughs.
‹
›
Home
View web version